The town was named after the area's first permanent settler, a full-blood Lower Creek Indian named Sapulpa, of the Kasihta Tribe, from Osocheetown, Alabama. About 1850, he established a trading post near the meeting of Polecat and Rock creeks (about one mile (1.6 km) southeast of present-day downtown Sapulpa). When the Atlantic and Pacific Railroad (later known as the Frisco Railroad) built a spur to this area in 1886, it was known as Sapulpa Station. The Sapulpa post office was chartered July 1, 1889. The town was incorporated March 31, 1898.

After Oklahoma became a state, each county held an election to determine the location of the county seat. Sapulpa competed with Bristow for county seat of Creek County. After five years of contested elections and court suits, the question was settled by the Oklahoma Supreme Court on August 1, 1913. Sapulpa was ruled the winner. The county courthouse was completed in 1914, replacing an earlier structure built in 1902.

The area around Sapulpa mainly produced walnuts when the town was founded. In 1898, the Sapulpa Pressed Brick was established, followed in a few years by the Sapulpa Brick Company. This began the clay products industry. The Frisco built a railyard in Sapulpa and by 1900 designated Sapulpa as the location of an overhaul base for its rolling stock. The founding of Premium Glass Company in 1912 marked Sapulpa's entry to glass manufacturing. Premium Glass was absorbed into Liberty Glass Company in 1918. Other glass producers in the city were Bartlett-Collins Glass Company, Schram Glass Company, and Sunflower Glass Company. According to the Encyclopedia of Oklahoma History, Sapulpa became known as "The Crystal City of the Southwest". Sapulpa is also the home of Frankoma Pottery.

There were 7,430 households out of which 32.5% had children under the age of 18 living with them, 54.8% were married couples living together, 12.9% had a female householder with no husband present, and 27.9% were non-families. 24.2% of all households were made up of individuals and 10.5% had someone living alone who was 65 years of age or older. The average household size was 2.54 and the average family size was 3.00. 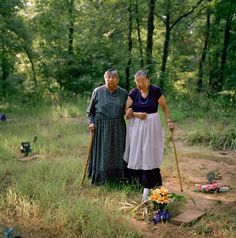 Sisters Maxine Wildcat Barnett (left) and Josephine Wildcat Bigler; two of the final surviving elderly speakers of Yuchi, visiting their grandmother's grave in a cemetery behind Pickett Chapel in Sapulpa, Oklahoma. According to the sisters, their grandmother had insisted that Yuchi be their native language.

In 2013, the Sapulpa Creek Community Center graduated a class of 14 from its Muscogee Creek language class.

All content from Kiddle encyclopedia articles (including the article images and facts) can be freely used under Attribution-ShareAlike license, unless stated otherwise. Cite this article:
Sapulpa, Oklahoma Facts for Kids. Kiddle Encyclopedia.