Kids Encyclopedia Facts
Not to be confused with Gwenpool.

Glenpool is a city in Tulsa County, Oklahoma, United States. It is part of the Tulsa Metropolitan Statistical Area (TMSA). As of 2020, the population was 14,040, which represented an increase of 29.9% since the 2010 census, which reported the total population as 10,808.

Glenpool is notable because the discovery of oil in 1905, which caused an economic boom that propelled the growth of Tulsa and its surroundings. Although the Glenn Pool field, for which the city was named, still produces a small amount of oil; the city is now primarily a commuter town for Tulsa. 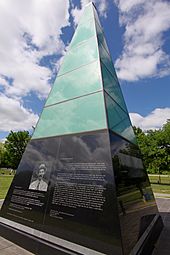 On November 22, 1905, wildcatters, Robert Galbreath and Frank Chesley (along with, by some accounts, Charles Colcord), drilling for oil on farmland owned by Creek Indian Ida E. Glenn, created the first oil gusher in what would soon be known as the "Glenn Pool". The discovery set off a boom of growth for the area, bringing in hordes of people: lease buyers, producers, millionaires, laborers, tool suppliers, drunks, swindlers, and newspeople. Daily production soon exceeded 120,000 barrels (19,000 m3). The nearby city of Tulsa benefited from the production, and Glenpool calls itself the town that made Tulsa famous.

By 1906, a settlement of Glenn, consisting of twelve families had grown up nearby. In that year, the Midland Valley Railroad extended a track from Jenks. By 1907, nearly 3,000 people had moved to the area, but only about 500 people actually lived in the town in 1910. Lots were platted and a post office opened on January 31, 1908. The new community was renamed Glenpool.

Sometime after the discovery, Ida Glenn and her husband, Robert, sold their farm and moved to California.

An annual celebration called "Black Gold Days" is a 3-day family-friendly event with food, music, arts and crafts, a carnival, and a parade. It commemorates the early years of Glenpool's history.

Glenpool is located in the northeastern corner of Oklahoma, about 15 miles (24 km) south of downtown Tulsa on U.S. Route 75, a major national north/south artery. The city is on the eastern edge of the Cross Timbers ecoregion, between the Great Plains and the foot of the Ozarks.

According to the United States Census Bureau, the city has a total land area of 9.3 square miles (24 km2) and no water.

Edith Durant, who is 18 on July 3, 1917, owns one of the richest oil and gas producers in the famous Glenn Pool in Tulsa county, where the first oil was struck in this country. Lee Hays and Monday Durant, joint guardians, will hand over next July to her a lease for the...company, giving her one-eighth of the production, $100,000 in cash, $50,000 in notes and mortgages and the title to a number of farms in Muskogee county, amounting in all to more than a million dollars.

Galbreath and Chesley had used their own money to pay for an oil drilling rig, with operator, and a lease on Ida Glenn's land. By November 22, 1905, they had drilled through the Red Fork Sand, the deepest known producing sand in the area without striking oil. There was a small stream of natural gas at a depth of 1,450 feet (440 m), so they decided to drill deeper. A few feet further down, the rig encountered a formation known as the Bartlesville Sand, where Chesley noticed the first trace of oil on the drill bit. The well began making a gurgling sound and soon emitted a gusher clear over the derrick. The well soon produced over 75 barrels a day of light, sweet crude oil. Galbreath and Chesley named the well Ida Glenn Number 1. In 1906, Galbreath drilled another well about 300 feet (91 m) from Ida Glenn Number 1. This well was also a producer.

Other people rushed to the area to begin drilling, and soon defined the extent of the field. Prices for leases and for drilling services rose sharply. Fewer than two percent of the wildcat wells failed to produce oil. Some of the Creek landowners began earning as much as a million dollars a year from royalties on the production from their 160-acre plots. According to one source,"... More money was made on the Oklahoma oil boom than the California gold rush and Colorado silver rush combined."

After only one year, the Glenn Pool field had 127 completed wells. Of these, 107 produced oil, 12 found only gas and 11 were dry holes. In addition, 24 more wells were in progress and 33 sites were being readied for drilling. By 1907, the field was increasingly controlled by three companies: Texaco, Gulf Oil Company and Prairie Oil and Gas. Galbreath and Chesley were ready to move on. They sold their Glenn Pool holdings to Edgar Crosbie for $US 500,000 and $US 200,000, respectively.

The Ida Glenn well was plugged and abandoned in 1964. The Glen Pool field still produces a relatively small flow of oil in the 21st Century using waterflood techniques. Over its life span, the field has produced more than 340 million barrels of oil.

Glenpool is in Tornado Alley and has a temperate climate of the humid subtropical variety (Köppen Cfa) with a yearly average temperature of 60 °F (16 °C). 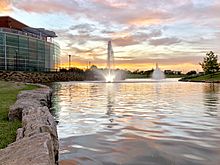 All content from Kiddle encyclopedia articles (including the article images and facts) can be freely used under Attribution-ShareAlike license, unless stated otherwise. Cite this article:
Glenpool, Oklahoma Facts for Kids. Kiddle Encyclopedia.