An outline of Significant Tornado Alley in the United States, where the highest percentage of violent tornadoes occur

Tornado activity in the United States.

Tornado Alley is a colloquial term most often used to refer to the area of the United States in which tornadoes happen more than in any other part of the country. The 1974 super tornado outbreak with 148 tornadoes, took place in Georgia, Illinois, Indiana, Kentucky, Michigan, Mississippi, North Carolina, Ohio, South Carolina, Tennessee, Virginia, and West Virginia.

States such as Minnesota, Wisconsin, Illinois, Indiana, and Ohio are sometimes included in Tornado Alley. Research suggests that tornadoes are happening more often in the northern parts of Tornado Alley where it reaches the Canadian prairies. 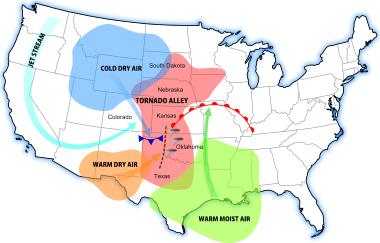 A diagram of tornado alley based on 1 tornado or more per decade. Rough location (red), and its contributing weather systems

Over the years, the location(s) of Tornado Alley have not been clearly defined. No definition of tornado alley has ever been officially chosen by the National Weather Service (NWS). Thus, differences in the place are because of the different criteria used.

The National Severe Storms Laboratory (NSSL) FAQ says that "Tornado Alley" is a term used by the media as a reference to areas that have mroe tornadoes. A study of 1921–1995 tornadoes concluded almost one-fourth of all significant tornadoes happen in this area.

No state has no tornadoes; however, they happen more often in the Central United States, between the Rocky Mountains and Appalachian Mountains.

Another criterion for the location of Tornado Alley (or Tornado Alleys) can be where the strongest tornadoes happen more often.

The term "tornado alley" was first used in 1952 by U.S. Air Force meteorologists Major Ernest J. Fawbush (1915–1982) and Captain Robert C. Miller (1920–1998). They used it as the title of a research project to study severe weather in parts of Texas and Oklahoma.

The average tornado stays on ground for only 5 minutes. These figures, reported by the National Climatic Data Center for the period between 1991 and 2010, show the seventeen U.S. states with the most average number of tornadoes per 10,000 square miles (25,899.9 km2) per year.

About half of all Canadian tornadoes hit the Canadian prairies and Northern Ontario as far east as Lake Superior. Together, these areas make up the northernmost border of the U.S. Tornado Alley. Tornadoes up to EF5 in strength have been found in this region.

Schools in Tornado Alley often have tornado drills, and many homes may have tornado shelters where people can go for safety.

All content from Kiddle encyclopedia articles (including the article images and facts) can be freely used under Attribution-ShareAlike license, unless stated otherwise. Cite this article:
Tornado Alley Facts for Kids. Kiddle Encyclopedia.