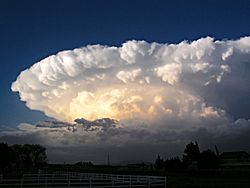 An example of a supercell.

Supercells are usually found isolated from other thunderstorms, although they can sometimes be embedded in a squall line. Typically, supercells are found in the warm sector of a low pressure system propagating generally in a north easterly direction in line with the cold front of the low pressure system. Because they can last for hours, they are known as quasi-steady-state storms. Supercells have the capability to deviate from the mean wind. If they track to the right or left of the mean wind (relative to the vertical wind shear), they are said to be "right-movers" or "left-movers," respectively. Supercells can sometimes develop two separate updrafts with opposing rotations, which splits the storm into two supercells: one left-mover and one right-mover.

Supercells can be any size – large or small, low or high topped. They usually produce copious amounts of hail, torrential rainfall, strong winds, and substantial downbursts. Supercells are one of the few types of clouds that typically spawn tornadoes within the mesocyclone, although only 30% or fewer do so.

Supercells can occur anywhere in the world under the right weather conditions. The first storm to be identified as the supercell type was the Wokingham storm over England, which was studied by Keith Browning and Frank Ludlam in 1962. Browning did the initial work that was followed up by Lemon and Doswell to develop the modern conceptual model of the supercell. To the extent that records are available, supercells are most frequent in the Great Plains of the central United States and southern Canada extending into the southeastern U.S. and northern Mexico; east-central Argentina and adjacent regions of Uruguay; Bangladesh and parts of eastern India; South Africa; and eastern Australia. Supercells occur occasionally in many other mid-latitude regions, including Eastern China and throughout Europe. The areas with highest frequencies of supercells are similar to those with the most occurrences of tornadoes; see tornado climatology and Tornado Alley.

Anatomy of a supercell 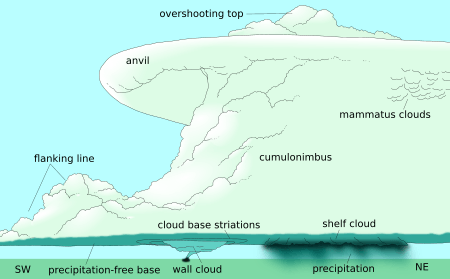 Schematic of a supercell components.

The current conceptual model of a supercell was described in Severe Thunderstorm Evolution and Mesocyclone Structure as Related to Tornadogenesis by Leslie R. Lemon and Charles A. Doswell III. (See Lemon technique). Moisture streams in from the side of the precipitation-free base and merges into a line of warm uplift region where the tower of the thundercloud is tipped by high-altitude shear winds. The high shear causes horizontal vorticity which is tilted within the updraft to become vertical vorticity, and the mass of clouds spins as it gains altitude up to the cap, which can be up to 55,000 feet (17,000 m)–70,000 feet (21,000 m) above ground for the largest storms, and trailing anvil.

Supercells derive their rotation through tilting of horizontal vorticity (an invisible horizontal vortex) caused by wind shear. Strong updrafts lift the air turning about a horizontal axis and cause this air to turn about a vertical axis. This forms the deep rotating updraft, the mesocyclone.

A cap or capping inversion is usually required to form an updraft of sufficient strength. The moisture-laden air is then cooled enough to precipitate as it is rotated toward the cooler region, represented by the turbulent air of the mammatus clouds where the warm air is spilling over top of the cooler, invading air. The cap is formed where shear winds block further uplift for a time, until a relative weakness allows a breakthrough of the cap (an overshooting top); cooler air to the right in the image may or may not form a shelf cloud, but the precipitation zone will occur where the heat engine of the uplift intermingles with the invading, colder air. The cap puts an inverted (warm-above-cold) layer above a normal (cold-above-warm) boundary layer, and by preventing warm surface air from rising, allows one or both of the following:

As the cooler but drier air circulates into the warm, moisture laden inflow, the cloud base will frequently form a wall, and the cloud base often experiences a lowering, which, in extreme cases, are where tornadoes are formed. This creates a warmer, moister layer below a cooler layer, which is increasingly unstable (because warm air is less dense and tends to rise). When the cap weakens or moves, explosive development follows.

In North America, supercells usually show up on Doppler radar as starting at a point or hook shape on the southwestern side, fanning out to the northeast. The heaviest precipitation is usually on the southwest side, ending abruptly short of the rain-free updraft base or main updraft (not visible to radar). The rear flank downdraft, or RFD, carries precipitation counterclockwise around the north and northwest side of the updraft base, producing a "hook echo" that indicates the presence of a mesocyclone.

Structure of a supercell 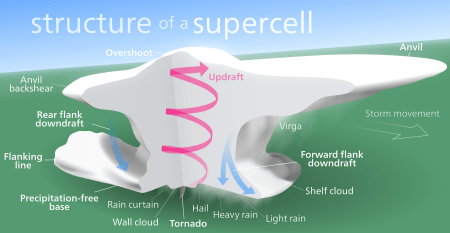 Structure of a supercell. Northwestward view in the Northern Hemisphere

This "dome" feature appears above the strongest updraft location on the anvil of the storm. It is a result of an updraft powerful enough to break through the upper levels of the troposphere into the lower stratosphere. An observer at ground level and close to the storm may be unable to see the overshooting top because the anvil blocks the sight of this feature. The overshooting is visible from satellite images as a "bubbling" amidst the otherwise smooth upper surface of the anvil cloud.

An anvil forms when the storm's updraft collides with the upper levels of the lowest layer of the atmosphere, or the tropopause, and has nowhere else to go due to the laws of fluid dynamics- specifically pressure, humidity, and density. The anvil is very cold and virtually precipitation-free even though virga can be seen falling from the forward sheared anvil. Since there is so little moisture in the anvil, winds can move freely. The clouds take on their anvil shape when the rising air reaches 15,200–21,300 metres (50,000–70,000 ft) or more. The anvil's distinguishing feature is that it juts out in front of the storm like a shelf. In some cases, it can even shear backwards, called a backsheared anvil, another sign of a very strong updraft.

This area, typically on the southern side of the storm in North America, is relatively precipitation-free. This is located beneath the main updraft, and is the main area of inflow. While no precipitation may be visible to an observer, large hail may be falling from this area. A region of this area is called the Vault. It is more accurately called the main updraft area.

The wall cloud forms near the downdraft/updraft interface. This "interface" is the area between the precipitation area and the precipitation-free base. Wall clouds form when rain-cooled air from the downdraft is pulled into the updraft. This wet, cold air quickly saturates as it is lifted by the updraft, forming a cloud that seems to "descend" from the precipitation-free base. Wall clouds are common and are not exclusive to supercells; only a small percentage actually produce a tornado, but if a storm does produce a tornado, it usually exhibits wall clouds that persist for more than ten minutes. Wall clouds that seem to move violently up or down, and violent movements of cloud fragments (scud or fractus) near the wall cloud, are indications that a tornado could form.

Mammatus (Mamma, Mammatocumulus) are bulbous or pillow-like cloud formations extending from beneath the anvil of a thunderstorm. These clouds form as cold air in the anvil region of a storm sinks into warmer air beneath it. Mammatus are most apparent when they are lit from one side or below and are therefore at their most impressive near sunset or shortly after sunrise when the sun is low in the sky. Mammatus are not exclusive to supercells and can be associated with developed thunderstorms and cumulonimbus. 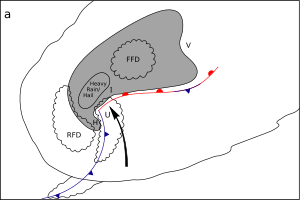 The Rear Flank Downdraft of a supercell is a very complex and not yet fully understood feature. RFDs mainly occur within classic and HP supercells although RFDs have been observed within LP supercells. The RFD of a supercell is believed to play a large part in tornadogenesis by tightening existing rotation within the surface mesocyclone. RFDs are caused by mid-level steering winds of a supercell colliding with the updraft tower and moving around it in all directions; specifically, the flow that is redirected downward is referred to as the RFD. This downward surge of relatively cool mid-level air, due to interactions between dew points, humidity, and condensation of the converging of air masses, can reach very high speeds and is known to cause widespread wind damage. The radar signature of an RFD is a hook-like structure where sinking air has brought with it precipitation.

A flanking line is a line of smaller cumulonimbi or cumulus that form in the warm rising air pulled in by the main updraft. Due to convergence and lifting along this line, landspouts sometimes occur on the outflow boundary of this region.

Radar features of a supercell 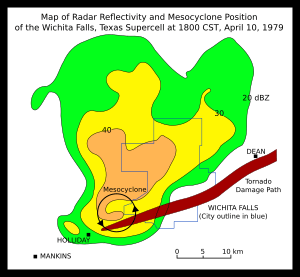 The "hook echo" is the area of confluence between the main updraft and the rear flank downdraft (RFD). This indicates the position of the mesocyclone and probably a tornado.

This is a region of low radar reflectivity bounded above by an area of higher radar reflectivity with an untilted updraft, also called a vault. It is not observed with all supercells but it is at the edge of a very high precipitation echos with a very sharp gradient perpendicular to the RFD. This is evidence of a strong updraft and often the presence of a tornado. To an observer on the ground, it could be experienced as a zone free of precipitation but usually containing large hail.

A "notch" of weak reflectivity on the inflow side of the cell. This is not a V-Notch.

A "V" shaped notch on the leading edge of the cell, opening away from the main downdraft. This is an indication of divergent flow around a powerful updraft.

This three body scatter spike is a region of weak echoes found radially behind the main reflectivity core at higher elevations when large hail is present.

All content from Kiddle encyclopedia articles (including the article images and facts) can be freely used under Attribution-ShareAlike license, unless stated otherwise. Cite this article:
Supercell Facts for Kids. Kiddle Encyclopedia.