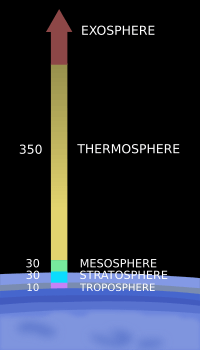 Atmosphere diagram showing the troposphere and other layers. The layers are not to scale.

The troposphere is the lowest part of Earth's atmosphere. It contains about 75% of the atmosphere's mass and 99% of its water vapor and aerosols. Its height is about 15 km. It is taller in the tropics (20 km) and shorter at the poles (7 km).

All content from Kiddle encyclopedia articles (including the article images and facts) can be freely used under Attribution-ShareAlike license, unless stated otherwise. Cite this article:
Troposphere Facts for Kids. Kiddle Encyclopedia.