Kids Encyclopedia Facts
This page is about the mountain in Colorado. For the race, see Pikes Peak International Hill Climb. For other uses, see Pikes Peak (disambiguation).

Pikes Peak is the highest summit of the southern Front Range of the Rocky Mountains, in North America. The ultra-prominent 14,115-foot (4,302.31 m) fourteener is located in Pike National Forest, 12 miles (19 km) west of downtown Colorado Springs, Colorado. The town of Manitou Springs lies at its base.

The mountain is named in honor of American explorer Zebulon Pike (though he was unable to reach the summit). The summit is higher than any point in the United States east of its longitude.

"Tava" or “sun,” is the Ute word that was given by these first people to the mountain that we now call Pikes Peak. The band of Ute people who called the Pikes Peak region their home were the "Tabeguache," meaning the "People of Sun Mountain." The Ute people first arrived in Colorado about 500 A.D., although their traditions say they were created on Pikes Peak. In the 1800s, when the Arapaho people arrived in Colorado, they knew the mountain as "Heey-otoyoo’ " meaning "Long Mountain". Early Spanish explorers named the mountain "El Capitán" meaning "The Leader". American explorer Zebulon Pike named the mountain "Highest Peak" in 1806, and the mountain was later commonly known as "Pike's Highest Peak". American explorer Stephen Harriman Long named the mountain "James Peak" in honor of Edwin James who climbed to the summit in 1820. The mountain was later renamed "Pike's Peak" in honor of Pike. The name was simplified to "Pikes Peak" by the United States Board on Geographic Names in 1890.

Pikes Peak is composed of a characteristic pink granite called Pikes Peak granite. The color is due to a large amount of potassium feldspar. It is thought that the granite was once magma that crystallized at least 20 miles (32 km) beneath the Earth's surface, formed by an igneous intrusion during the Precambrian, approximately 1.05 billion years ago, during the Grenville orogeny. Through the process of uplifting, the hardened rock pushed through the Earth's crust and created a dome-like mountain, covered with less resistant rock. Years of erosion and weathering removed the soil and rock leaving the exposed mountain.

Soils on Pikes Peak are classified as Cirque Land above timberline; forests at lower altitudes are mostly supported by brown stony sandy loam of the Catamount or Ivywild series.

The first Europeans to discover Pikes Peak were the Spanish in the 1700s. The first American sighting is often credited to members of the Pike expedition, led by Zebulon Pike. After a failed attempt to climb to the top in November 1806, Pike wrote in his journal:

...here we found the snow middle deep; no sign of beast or bird inhabiting this region. The thermometer which stood at 9° above 0 at the foot of the mountain, here fell to 4° below 0. The summit of the Grand Peak, which was entirely bare of vegetation and covered with snow, now appeared at the distance of 15 or 16 miles from us, and as high again as what we had ascended, and would have taken a whole day's march to have arrived at its base, when I believed no human being could have ascended to its pinical [sic]. This with the condition of my soldiers who had only light overalls on, and no stockings, and every way ill provided to endure the inclemency of the region; the bad prospect of killing any thing to subsist on, with the further detention of two or three days, which it must occasion, determined us to return. 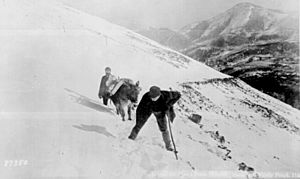 An 1890 winter climb (near Windy Point) up Pikes Peak 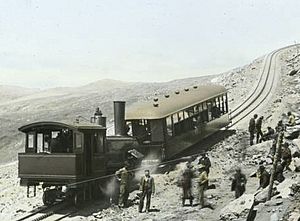 The first European-American to climb the peak came 14 years after Pike, in the summer of 1820. Edwin James, a young student who had just graduated from Middlebury College in Vermont, signed on as the relief botanist for Stephen Harriman Long's expedition after the first botanist had died. The expedition explored the South Platte River up as far as present-day Denver, then turned south and passed close to what James called "Pike's highest peak." James and two other men left the expedition, camped on the plains, and climbed the peak in two days, encountering little difficulty. Along the way, James was the first to describe the blue columbine, Colorado's state flower.

Gold was discovered in the area of present-day Denver in 1858, and newspapers referred to the gold-mining area as "Pike's Peak." Pike's Peak or Bust became the slogan of the Colorado Gold Rush (see also Fifty-Niner). This was more due to Pikes Peak's visibility to gold seekers traveling west across the plains than any actual significant gold find anywhere near Pikes Peak. Major gold deposits were not discovered in the Pikes Peak area until the Cripple Creek Mining District was discovered southwest of Pikes Peak and led, in 1893, to one of the last major gold rushes in the lower 48 states. 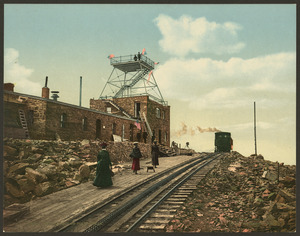 In July 1860, Clark, Gruber and Company commenced minting gold coins in Denver bearing the phrase "Pike's Peak Gold" and an artist's rendering of the peak (sight unseen) on the obverse. In 1863, the U.S. Treasury purchased the minting equipment for $25,000 to open the Denver Mint.

Julia Archibald Holmes and James Holmes traveled to the Rocky Mountains in Colorado in 1858, and reached the summit on August 5, with J. D. Miller and George Peck, making Archibald Holmes the first European-American woman to climb Pikes Peak. From the summit, she wrote in a letter to her mother: "Nearly everyone tried to discourage me from attempting it, but I believed that I should succeed; and now here I am, and I feel that I would not have missed this glorious sight for anything at all.”

Thirty-five years later, in July 1893, Katharine Lee Bates wrote the song "America the Beautiful", after having admired the view from the top of Pikes Peak. It appeared in print in The Congregationalist, a weekly journal, on July 4, 1895. A plaque commemorating the words to the song was placed at the summit.

During 1899, the Serbian physicist Nikola Tesla built his first working version of the Magnifying Transmitter in his laboratory some kilometers away from Colorado Springs, up in Pike's Peak, where he worked on his idea of wireless energy transmission and investigated the ionosphere and the telluric currents in the planets. Here, he proved that Earth is a good conductor, and he produced artificial bolt of 40 meters and millions of volts. He stated that during this year he discovered the Earth' stationary waves. 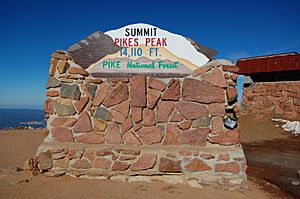 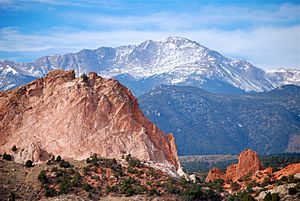 Pikes Peak dominates the backdrop of Garden of the Gods. 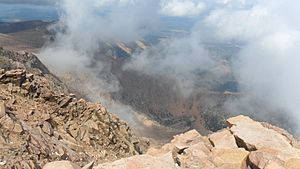 There are several visitor centers on Pikes Peak, some with a gift shop and restaurant. These centers are located at the 6 mile, 12-mile (19 km) and the summit itself, and there are several ways to ascend the mountain. The Manitou and Pike's Peak Railway is a cog railroad operating from Manitou Springs to the summit year-round, conditions permitting. Automobiles can be driven to the summit via the Pikes Peak Highway, a 19 mi (31 km) road that starts a few miles up Ute Pass at Cascade. This road, which until October 2011 was unpaved after the halfway point, was made famous worldwide by the short film Climb Dance featuring Ari Vatanen racing his Peugeot automobile up the steep, twisty slopes as part of the annual Pikes Peak International Hill Climb race. The road has a series of switchbacks, treacherous at high speed, called "The W's" for their shape on the side of the mountain. The road is maintained by the city of Colorado Springs as a toll road.

A project to pave the remainder of the road was completed on October 1, 2011. The project is in response to a suit by the Sierra Club over damage caused by the gravel and sediment that is constantly washed off the road into the alpine environment. The road remained open during construction.

The most popular hiking route to the top is called Barr Trail, which approaches the summit from the east. The trailhead is just past the cog railway depot in Manitou Springs. Visitors can walk, hike, or bike the trail. Although the Barr Trail is rated only Class 1 it is a long and arduous hike with nearly 8,000 feet of elevation gain, and a 13 mile trip one-way. Runners race to the top and back on Barr Trail in the annual Pikes Peak Marathon. Another route begins at Crags Campground, approaching the summit from the west.

At the peak, the partial pressure of oxygen is only about 60% of that at sea level, so a faster rate of respiration is required by those not regularly at high altitudes. Those familiar with altitude training know that prolonged exposure to the reduced pressures of high altitudes will produce more red blood cells to offset the lower oxygen availability. For the unacclimated, altitude sickness may develop in those who are sensitive or who over-exert themselves. Since 1969, the summit of Pikes Peak has been the site of the United States Army Pikes Peak Research Laboratory, a medical research laboratory for the assessment of the impact of high altitude on human physiological and medical parameters of military interest. Because of the lower pressure, water boils at 85.5 °C at 14,000 feet.

Conditions at the top are typical of a high alpine environment. Snow is a possibility any time year-round, and thunderstorms are common in the summer.

The summit of Pikes Peak has a polar climate due to its elevation, with snowfall possible year round. Surrounding areas have different climatic variations depending on location and elevation. Much of the area near Pikes Peak has a continental semiarid climate, while other areas would be classified as hemiboreal.

All content from Kiddle encyclopedia articles (including the article images and facts) can be freely used under Attribution-ShareAlike license, unless stated otherwise. Cite this article:
Pikes Peak Facts for Kids. Kiddle Encyclopedia.