The historic City of Cripple Creek is the Statutory City that is the county seat of Teller County, Colorado, United States. The city population was 1,155 at the 2020 United States Census. Cripple Creek is a former gold mining camp located 20 miles (32 km) southwest of Colorado Springs near the base of Pikes Peak. The Cripple Creek Historic District, which received National Historic Landmark status in 1961, includes part or all of the city and the surrounding area. The city is now a part of the Colorado Springs, CO Metropolitan Statistical Area and the Front Range Urban Corridor. 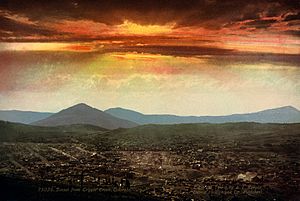 Sunset in Cripple Creek in 1899 with Mt. Pisgah – the conical peak at left 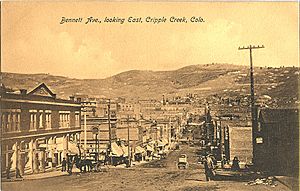 For many years Cripple Creek's high valley, at an elevation of 9,494 feet (2,894 m), was considered no more important than a cattle pasture. Many prospectors avoided the area after the Mount Pisgah hoax, a mini gold rush caused by salting (adding gold to worthless rock).

On the 20th of October, 1890, Robert Miller "Bob" Womack discovered a rich ore and the last great Colorado gold rush began. Thousands of prospectors flocked to the region, and before long Winfield Scott Stratton located the famous Independence lode, one of the largest gold strikes in history. In three years, the population increased from five hundred to ten thousand by 1893. Although $500 million worth of gold ore was dug from Cripple Creek, Womack died penniless on 10 August 1909.

In 1896 Cripple Creek suffered two disastrous fires. The first occurred on April 25 destroying half of the city including much of the business district. Four days later another fire destroyed much of the remaining half. The city was rebuilt in a period of a few months, most historic buildings today date back to 1896.

By 1900, Cripple Creek and its sister city, Victor, were substantial mining communities.

During the 1890s, many of the miners in the Cripple Creek area joined a miners' union, the Western Federation of Miners (WFM). A significant strike took place in 1894, marking one of the few times in history that a sitting governor called out the national guard to protect miners from anti-union violence by forces under the control of the mine owners. By 1903, the allegiance of the state government had shifted and Governor James Peabody sent the Colorado National Guard into Cripple Creek with the goal of destroying union power in the gold camps. The WFM strike of 1903 and the governor's response precipitated the Colorado Labor Wars, a struggle that took many lives.

Through 2005, the Cripple Creek district produced about 23.5 million troy ounces (979 1/6 troy tons; 731 metric tons) of gold. The underground mines are mostly idle, except for a few small operations. There are significant underground deposits remaining which may become feasible to mine in the future. Large scale open pit mining and cyanide heap leach extraction of near-surface ore material, left behind by the old time miners as low grade, has taken place since 1994 east of Cripple Creek, near its sister city of Victor, Colorado.

The current mining operation is conducted by Cripple Creek and Victor Gold Mining Company (CC&V) ran currently by Newmont Mining. The mine operates 24 hours a day, 365 days a year. Mine operations, maintenance, and processing departments work a rotating day/night schedule in 12-hour shifts.

With many empty storefronts and picturesque homes, Cripple Creek once drew interest as a ghost town. At one point the population dropped to a few hundred, although Cripple Creek was never entirely deserted. In the 1970s and 1980s travelers on photo safari might find themselves in a beautiful decaying historic town. A few restaurants and bars catered to tourists who could pass weathered empty homes with lace curtains hanging in broken windows.

Colorado voters allowed Cripple Creek to establish legalized gambling in 1991. Cripple Creek is currently more of a gambling and tourist town than a ghost town. Casinos now occupy many historic buildings. Casino gambling has been successful in bringing revenue and vitality back into the area. It also provides funding for the State Historical Fund, administered by the Colorado Office of Archaeology and Historic Preservation. In 2012, Colorado casinos produced over $104 million in tax revenue for these programs.

The gold-bearing area of the Cripple Creek district was the core of an ancient volcano within the central Colorado volcanic field, last active over 30 million years ago during the Oligocene. Free or native gold was found near the surface but at depth unoxidized gold tellurides and sulfides were found.

The community takes its name from nearby Cripple Creek.

There were 494 households, out of which 23.3% had children under the age of 18 living with them, 44.7% were married couples living together, 7.9% had a female householder with no husband present, and 42.9% were non-families. 30.4% of all households were made up of individuals, and 4.9% had someone living alone who was 65 years of age or older. The average household size was 2.26 and the average family size was 2.82. 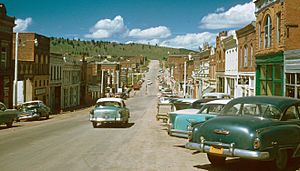 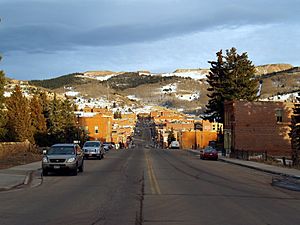 In 2006 Cripple Creek broke ground on the new Pikes Peak Heritage Center. Constructed at a cost over $2.5 million, the building is over 11,000 square feet (1,000 m2) of educational displays. State of the art electronics are used throughout the building and there is also a theatre showing historical films about the area. Newly named the Cripple Creek Heritage Center, admission is free.

Cripple Creek is also home to the Butte Opera House, a theatre first managed by the Mackin family (previous owners of the Imperial Hotel and producers of a long-running, much-loved melodrama theatre company). The Butte is currently the home of the Thin Air Theatre Company that produces plays year-round including such shows as A Cripple Creek Christmas Carol, Werewolves of Poverty Gulch, The Christmas Donkey and The Vampire of Cripple Creek.

Cripple Creek features many events throughout the year like the Cripple Creek Ice Festival, Donkey Derby Days, the July 4 Celebration, and a Gold Camp Christmas.

Cripple Creek is home to the following casinos:

All content from Kiddle encyclopedia articles (including the article images and facts) can be freely used under Attribution-ShareAlike license, unless stated otherwise. Cite this article:
Cripple Creek, Colorado Facts for Kids. Kiddle Encyclopedia.