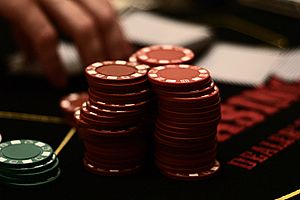 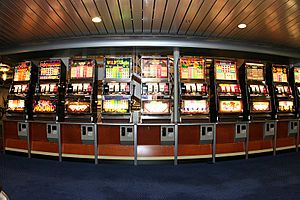 Slot machines, on a Norwegian ferry.

Gambling is a contest where a player bets on the result of an event. The bet is generally in the form of money. The rules and the amount of money bet have to be decided on before the event happens. 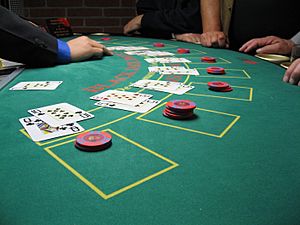 Games such as Blackjack are typical

There are three variables common to all gambling.

There are many types of gambling. Casino games, sports betting (especially horse racing), and state lotteries are some of the most common forms of gambling. Investments, such as stocks, bonds and real estate, are also sometimes considered forms of gambling. Generally, the odds are not in favor of the gambler.

Many people gamble for fun and entertainment. For others it becomes an addiction and a financial burden. Gambling addiction is a serious mental health issue that can become life-threatening. People with a gambling problem should seek help. Research shows that older people are more vulnerable and how the brain can get addicted to gambling.

Gambling regulation differs in different countries. Some have established specific legal institutions. However, some countries have only overseeing laws. A well-known executive institution is The Gambling Commission in the UK. Its main function is controlling commercial gambling in partnership with people in charge of licensing. An example of strict ruling is the Gambling Law in the USA. The law decides gaming rules for local, state, and federal businesses.

In some places, such as mainland China, gambling is illegal. Chinese people cannot do so inside their country, so they go outside of it, such as to Macau, which is known as the "gambling capital of the world" because of its many big casinos. Other countries and local governments, such as Hong Kong, have some kind of gambling control board to make sure people don't gamble too much while allowing them to gamble.

All content from Kiddle encyclopedia articles (including the article images and facts) can be freely used under Attribution-ShareAlike license, unless stated otherwise. Cite this article:
Gambling Facts for Kids. Kiddle Encyclopedia.