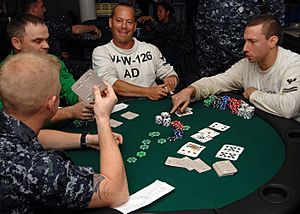 A Texas hold 'em match in progress. Hold 'em is a popular form of poker in the USA.

Poker is a game which people play with a normal set (or deck) of 52 cards. Poker is a gambling game which involves some luck, but also some skill. In poker, players make bets against each other depending on the value of their poker hand. Bets are usually made with plastic or ceramic discs called chips. Bets may also be made with real money, but chips are more often used because they are easier to handle and count. At the end of the game, players either swap their chips for money, or the chips are counted to determine the order of winners.

There are many different kinds of poker. In draw poker, each player is dealt five cards. A player can decide to throw away a number of these cards and then take (draw) new cards to replace them.

The history of poker is a matter of some debate. The name of the game likely descended from the French poque, which descended from the German pochen ('to knock'), but it is not clear whether the origins of poker itself lie with the games bearing those names. It closely resembles the Persian game of as nas, and may have been taught to French settlers in New Orleans by Persian sailors. It is commonly regarded as sharing ancestry with the Renaissance game of primero and the French brelan. The English game brag (earlier bragg) clearly descended from brelan and incorporated bluffing (though the concept was known in other games by that time). It is quite possible that all of these earlier games influenced the development of poker as it exists now.

English actor Joseph Crowell reported that the game was played in New Orleans in 1829, with a deck of 20 cards, four players betting on which player's hand was the most valuable. Jonathan H. Green's book, An Exposure of the Arts and Miseries of Gambling (G. B. Zieber, Philadelphia, 1843), described the spread of the game from there to the rest of the country by Mississippi riverboats, on which gambling was a common pastime.

Soon after this spread, the full 52-card English deck was used, and the flush was introduced. During the American Civil War, many additions were made, including draw poker, stud poker (the five-card variant), and the straight. Further American developments followed, such as the wild card (around 1875), lowball and split-pot poker (around 1900), and community card poker games (around 1925). Spread of the game to other countries, particularly in Asia, is often attributed to the U.S. military.

The game and jargon of poker have become important parts of American culture and English culture. Such phrases as ace in the hole, beats me, blue chip, call the bluff, cash in, pass the buck, poker face, stack up, up the ante, when the chips are down, wild card, and others are used in everyday conversation even by those unaware of their origins at the poker table.

Modern tournament play became popular in American casinos after the World Series of Poker began in 1970. It was also during that decade that the first serious strategy books appeared, notably The Theory of Poker by David Sklansky (ISBN: 1880685000), Super System by Doyle Brunson (ISBN: 1580420818), and The Book of Tells by Mike Caro (ISBN: 0897461002).

Poker’s popularity has experienced an unprecedented spike in recent years, largely due to the introduction of online poker and the invention of the hole-card camera which finally turned the game into a spectator sport. Viewers can now follow the action and drama of the game, and broadcasts of poker tournaments such as the World Series of Poker and the World Poker Tour have brought in huge audiences for cable and satellite TV distributors. 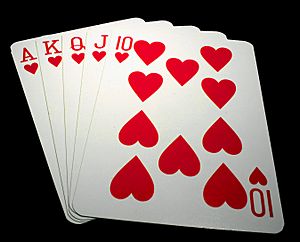 The game of poker is played in hundreds of variations, but the following overview of game play applies to most of them.

Depending on the game rules, one or more players may be required to place an initial amount of money into the pot before the cards are dealt. These are called forced bets and come in three forms: antes, blinds, and bring-ins.

Like most card games, the dealer shuffles the deck of cards. The deck is then cut, and the appropriate number of cards are dealt face-down to the players. In a casino a "house" dealer handles the cards for each hand, but a button (any small item used as a marker, also called a buck) is rotated among the players to determine the order of dealing and betting in certain games. In a home game, the right to deal the cards typically rotates among the players clockwise, but a button may still be used.

After the initial deal, the first of what may be several betting rounds begins. Between rounds, the players' hands develop in some way, often by being dealt additional cards or replacing cards previously dealt. During a round of betting, there will always be a current bet amount, which is the total amount of money bet in this round by the player who bet last in this round. To keep better track of this, it is conventional for players to not place their bets directly into the pot (called splashing the pot), but rather place them in front of themselves toward the pot, until the betting round is over. When the round is over, the bets are then gathered into the pot.

After the first betting round is completed (every participating player having called an equal amount), there may be more rounds in which more cards are dealt in various ways, followed by further rounds of betting (into the same central pot). At any time during the first or subsequent betting rounds, if one player makes a bet and all other players fold, the deal ends immediately, the single remaining player is awarded the pot, no cards are shown, no more rounds are dealt, and the next deal begins. This is what makes it possible to bluff.

At the end of the last betting round, if more than one player remains, there is a showdown in which the players reveal their previously hidden cards and evaluate their hands. The player with the best hand according to the poker variant being played wins the pot.

The following are poker hands, from best to worst:

Poker chips are small disks. They made by various materials including molded plastic, colored metal  molded clays. They are used in table games as play money. Modern poker traces its roots towards the 1800s, and in those days, players used what you could to help keep a tally. Coins, gold dust and nuggets were used until they considered replacing with something which would indicate them. Thus, the casino chips happen to be introduced within the gambling business.

Poker rooms started using casino chips to simply manage the cash and then collect charges. In those days, casino chips were created of ivory, bone, paper  wood. However, the most generally used chips were created of composite clay. One problem made an appearance due to the developing casino chips which was cheating. Some players considered sneaking some chips in their hands. To avoid this, manufacturers created differentiated disks. Consequently, a range of styles was created. With time, other manufacturers could use many other materials for making casino chips, for example, plastic and metal.

All content from Kiddle encyclopedia articles (including the article images and facts) can be freely used under Attribution-ShareAlike license, unless stated otherwise. Cite this article:
Poker Facts for Kids. Kiddle Encyclopedia.