James Garner (born James Scott Bumgarner; April 7, 1928 – July 19, 2014) was an American actor, producer, and voice artist. He starred in several television series over more than five decades, including such popular roles as Bret Maverick in the 1950s western series Maverick and Jim Rockford in The Rockford Files, and played leading roles in more than 50 theatrical films.

James Garner was born James Scott Bumgarner on April 7, 1928, in Norman, Oklahoma, the youngest of three sons. After the war, Garner joined his father in Los Angeles and enrolled at Hollywood High School, where he was voted the most popular student. He played football and basketball at Norman High School, and competed on the track and golf teams. However, he dropped out in his senior year. In a 1976 Good Housekeeping magazine interview, he admitted, "I was a terrible student and I never actually graduated from high school, but I got my diploma in the Army."

After working at several jobs he disliked, Garner joined the United States Merchant Marine at age 16 near the end of World War II. He liked the work and his shipmates, but he suffered from chronic seasickness.

Garner enlisted in the California Army National Guard, serving his first 7 months in California. He then went to Korea for 14 months, as a rifleman in the 5th Regimental Combat Team during the Korean War. He was wounded twice, first in the face and hand by shrapnel from a mortar round, and the second time from friendly fire from U.S. fighter jets as he dove headfirst into a foxhole.

Garner received the Purple Heart in Korea for the first wound. He qualified for a second Purple Heart as the result of friendly fire while actively engaging the enemy, but he did not actually receive it until 1983, 32 years after the event.

In 1954 a friend whom Garner had met while attending Hollywood High School, persuaded Garner to take a nonspeaking role in the Broadway production of The Caine Mutiny Court-Martial, where he was able to study Henry Fonda night after night. Fonda's gentle, sincere persona rubbed off on Garner, greatly to Garner's benefit. 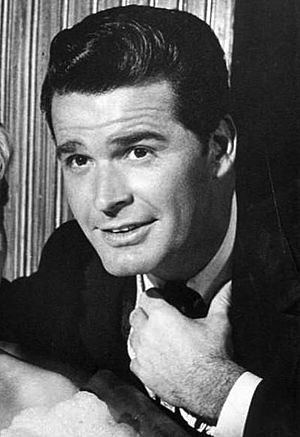 Garner subsequently moved to television commercials and eventually to television roles. In 1957, he had a supporting role in the TV anthology series episode on Conflict entitled "Man from 1997. The series' producer Roy Huggins cast Garner as the lead in Maverick due to his comedic facial expressions while playing scenes in Man from 1997 that were not originally written to be comical. He changed his last name from Bumgarner to Garner after the studio had credited him as "James Garner" without permission.

In the 1970s, Roy Huggins had an idea to remake Maverick, but this time as a modern-day private detective. Garner was selected to attempt to rekindle the success of Maverick, eventually recycling many of the plots from the original series. Starting with the 1974 season, Garner appeared as private investigator Jim Rockford in The Rockford Files. He appeared for six seasons, for which he received an Emmy Award for Best Actor in 1977.

After six seasons, The Rockford Files was cancelled in 1980. Although low ratings were primarily to blame, the physical toll on Garner was also an issue. Appearing in nearly every scene of the series, doing many of his own stunts—including one that injured his back was wearing him out. A knee injury from his National Guard days worsened in the wake of the continuous jumping and rolling. 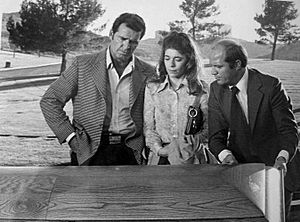 Nominated for 15 Emmy Awards during his television career, Garner received the award in 1977 as Outstanding Lead Actor in a Drama Series (The Rockford Files) and in 1987 as executive producer of Promise.

For his contribution to the film and television industry, Garner received a star on the Hollywood Walk of Fame.

In 1990, he was inducted into the Western Performers Hall of Fame at the National Cowboy & Western Heritage Museum in Oklahoma City, Oklahoma. He was also inducted into the Television Hall of Fame that same year. In February 2005, he received the Screen Actors Guild's Lifetime Achievement Award. In 2010, the Television Critics Association gave Garner its annual Career Achievement Award.

On April 21, 2006, a 10-foot-tall (3.0 m) bronze statue of Garner as Bret Maverick was unveiled in Garner's hometown of Norman, Oklahoma, with Garner present at the ceremony. 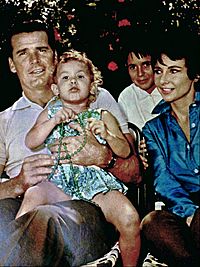 Garner was married to Lois Josephine Fleischman Clarke. When Garner and Clarke married, her daughter Kim from a previous marriage was seven years old. Garner had one daughter with Lois, Greta "Gigi" Garner.

Garner's knees became a chronic problem during the filming of The Rockford Files in the 1970s, with six or seven knee operations during that time. In 2000, he underwent knee replacement surgery for both of them. In April 22, 1988, Garner had heart surgery. Though he recovered rapidly, he was advised to stop smoking. Garner quit smoking 17 years later. 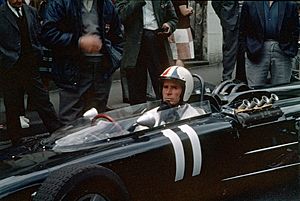 James Garner during the shooting of the film Grand Prix, in 1966

Garner was an owner of the "American International Racers" (AIR) auto racing team from 1967 through 1969. Motorsports writer William Edgar and Hollywood director Andy Sidaris teamed with Garner for the racing documentary The Racing Scene, filmed in 1969 and released in 1970. The team fielded cars at Le Mans, Daytona, and Sebring endurance races, but is best known for Garner's celebrity status raising publicity in early off-road motor-sports events. In 1978, he was one of the inductees in the Off-Road Motorsports Hall of Fame.

He was an avid golfer for many years. Along with his brother, Jack, he played golf in high school. Garner took it up again in the late 1950s to see if he could beat Jack. He was a regular for years at Pebble Beach Pro-Am. In February 1990 at the AT&T Golf Tournament, he won the Most Valuable Amateur Trophy. Garner appeared on Sam Snead's Celebrity Golf TV series which aired from 1960 – 1963. These matches were 9-hole charity events pitting Snead against Hollywood celebrities.

Garner was noted as an enthusiastic fan of the Raiders in the NFL, particularly when they played in Los Angeles between 1982 and 1994, when he regularly attended games and mixed with the players.

A private and introverted man, according to family and friends, on Saturday evening, July 19, 2014, police and rescue personnel were summoned to Garner's Los Angeles-area home, where they found the actor dead at the age of 86. He had been in poor health since a severe stroke in 2008. He died less than a month before his 58th wedding anniversary.

All content from Kiddle encyclopedia articles (including the article images and facts) can be freely used under Attribution-ShareAlike license, unless stated otherwise. Cite this article:
James Garner Facts for Kids. Kiddle Encyclopedia.