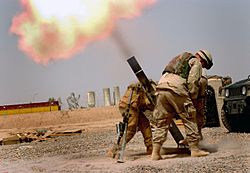 A mortar is an artillery weapon which fires explosive shells. The shells are known as (mortar) bombs. They are fired at targets which are close, as mortars do not have long range. It has a short barrel which fires the mortar bomb at a low speed high into the air to reach its target. They have been used since medieval times. Mortars are made in different sizes, from large and heavy mortars to infantry mortars which can be carried by just one soldier. They are called an indirect fire weapon because the bomb drops onto the target from above, rather than being aimed straight at it. Soldiers firing a mortar do not need to be able to see their target. 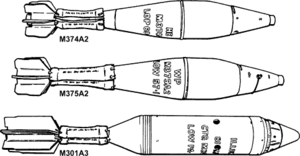 A mortar is quite simple and easy to use. Mortars used today are made up of a tube that a gunner drops a bomb into. The tube is usually set at between 45 and 90 degrees angle to the ground. The higher the angle, the shorter the range. When the bomb reaches the bottom of the tube it hits a firing pin. The mortar bomb's weight is enough to set off the firing pin which ignites the round and fires it. Some larger mortars have a firing pin that is set off by using a string instead of automatically.

From the 18th to the early 20th century, very heavy siege mortars were used. These were very difficult to move around. These had up to one metre calibre. They were often made of cast iron. Smaller designs that were easier to move around were brought in during the First World War. Mortars are still used today. 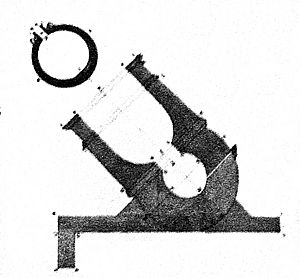 A diagram of a French mortar. This is from the 18th century.

Light and medium mortars are easy to move around. They are usually used by infantry units. Mortars can fire from a trench or defilade.

Heavy mortars are usually between 120- and 300-mm calibre. These weapons are usually towed or put on to vehicles. They are sometimes loaded from the back (breech-loaded). They are usually used by infantry in battalions or divisions. Even mortars this large are simpler and cheaper than howitzers and field guns.

A mortar can be moved around by one or more people (bigger mortars can usually be broken down into parts) or moved around in a vehicle. An infantry mortar can usually be set up and fired from a mortar-carrier. A mortar-carrier is a changed armoured vehicle or one built especially to be a mortar-carrier. They have a big hatch on the roof. Mortars with two barrels—like the AMOS PT1—are the latest kinds of heavy mortar. They are put on things like armoured personnel carriers, tank chassis and patrol boats.

Light versions of mortar are usually used by at least two men. Heavier mortars are fired by three to five men. Lighter mortars can be fired from anywhere that gives a good firing position. However, medium mortars usually fired from prepared, well fortified positions. 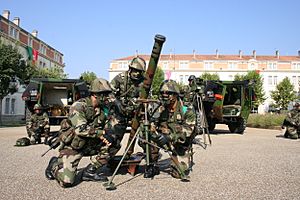 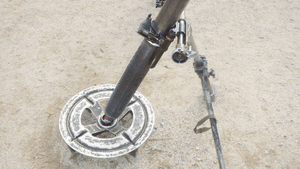 Picture of the base plate and bipod attached to the barrel of a mortar.

Most mortars used today are made up of a barrel, a plate for the barrel to stand on, and a bipod.

Mortars are mainly medium calibre weapons. However, mortars both bigger and smaller than this have been made. An example of a smaller mortar is the British 51 mm Light Mortar. The 51 mm is carried by just one soldier. It is made up of only a tube and a base plate. A bigger example is the Soviet 2S4 M1975 Tyulpan (tulip flower) 240 mm self-propelled mortar.

Mortars are not very stable if they are used on snow or soft ground. This is because the recoil pushes them into the ground. The Raschen Bag can be used to avoid this problem.

The ammunition fired by mortars are properly called "bombs". One possible reason for this is that the fins that stabilise the round when it is flying, and the shape of the round makes it look like a bomb dropped from aircraft.

Mortars can fire many different bombs. Some of these are: 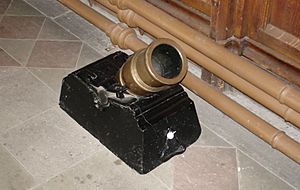 Mortars are usually smaller and lighter than howitzers and field guns. When the mortar bomb is launched, it comes down at a very steep angle (almost straight down).

Mortars can be very helpful if they are used in hidden places. It can be even more helpful if there are people around the battlefield that help tell the mortar where to fire (forward observers). 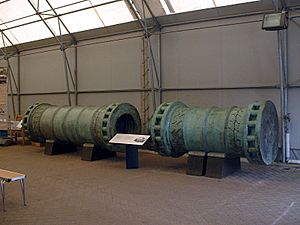 Mortars have existed for hundreds of years. They were first used in sieges. A European description of the Siege of Belgrade (1456) by Giovanni da Tagliacozzo says that the Ottoman Turks used seven mortars that fired "stone shots one Italian mile high". The speed of these was said to be very slow. It was also said that men could be prevented from being injured by putting observers out who warned the troops of what angle the mortars were firing at.

Early mortars like the Pumhart von Steyr were big and heavy. They were also difficult to move around. An early mortar that could be moved around easily was invented by Baron Menno van Coehoorn (Siege of Grave, 1673). At the Siege of Vicksburg, General US Grant reported making mortars "by taking logs of the toughest wood that could be found, boring them out for six or twelve-pound shells and binding them with strong iron bands. These answered as cochorns, and shells were successfully thrown from them into the trenches of the enemy."

Mortars were very useful in the muddy trenches of the Western Front. A mortar round could be aimed to fall straight into a trench because of the deep angle that the bombs fell at.

During the Battle of Iwo Jima, the Imperial Japanese Army used twelve 320 mm mortars against the American forces.

The biggest mortars ever made were the French "Monster Mortar" (36 French inches; 975 mm; developed by Henri-Joseph Paixhans in 1832), Mallet's Mortar (36 inches; 910 mm; designed by Robert Mallet and tested by the Woolwich Arsenal, London, in 1857) and the "Little David" (36 inches; 914.4 mm; developed in the United States for use in World War II). All three mortars had a caliber of 36 "inches". However, only the "Monster Mortar" was used (at the Battle of Antwerp in 1832). 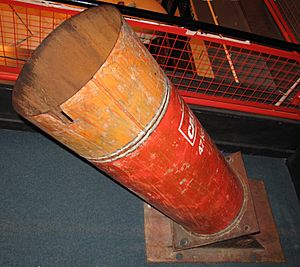 "Home-made" mortars have been used by insurgent groups. They are usually used to attack well defended military bases or to scare civilians. An early example was the Davidka. This was used during the Israeli War of Independence in 1948. The Provisional Irish Republican Army used some of the best-known examples during the 1970s, 1980s and 1990s. The biggest types came to be known as "barracks busters". They were usually made of heavy steel piping put onto a steel frame.

Well-known events using "home-made" mortars include the 1985 Newry mortar attack. This was when nine members of the Royal Ulster Constabulary were killed. Another well-known event is the Downing Street mortar attack in 1991. In this, the IRA mortared 10 Downing Street during a meeting. Three bombs were launched but only one exploded. It landed in the back garden of the British Prime Minister's house. It only broke the windows at the back of the house. Prime Minister John Major had to move to Admiralty House while the windows were being fixed.

All content from Kiddle encyclopedia articles (including the article images and facts) can be freely used under Attribution-ShareAlike license, unless stated otherwise. Cite this article:
Mortar (weapon) Facts for Kids. Kiddle Encyclopedia.