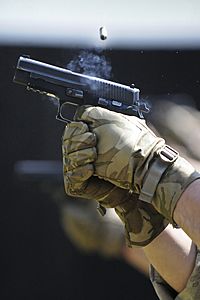 Recoil causes the handgun to move back and upwards when fired

Recoil or kick (sometimes incorrectly called kickback) is the tendency of a firearm to move backwards and at the same time the muzzle of the gun to rise when fired. This is a reaction to the explosive force of a bullet leaving the barrel of a firearm. A handgun shooter feels the recoil in the hands and arms. A rifle or shotgun shooter feels most of the recoil in his or her shoulder.

Recoil is explained by Newton’s third law of motion. It is usually paraphrased as: "to every action there is always an equal and opposite reaction". In simpler terms, when a projectile and the hot gasses go forward, the firearm goes backwards. There are a number of factors that determine the amount of backward force.

For example, a .22 Long Rifle (the designation of the bullet not the gun) has very little recoil. For this reason it is a caliber recommended for beginning shooters and, because the rounds are cheap, it is good practice ammunition for more experienced shooters. It is a favorite ammunition for target shooting. By comparison, the .500 S&W Magnum handgun round has very heavy recoil. Also, the recoil from the .500 magnum round is more sharply felt since the recoil speed is much greater.

One of the first things new shooters want to know is if a gun will kick them. New shooters learn to hold the gun firmly to reduce and control recoil. If firing a handgun, use both hands. If firing a shotgun or rifle, press it firmly against the shoulder and press your cheek on the gunstock. But, instructors often tell new students that recoil is 80% mental and only 20% physical. In other words, no matter how well you hold the weapon, recoil anticipation can ruin every shot.

Recoil anticipation, or more commonly known as "flinching", is the unintended (not intended or planned mental and physical response to firing a gun. The shooter knows the loud noise and shock of firing the weapon is coming and at the last moment flinches. This often causes an inexperienced shooter to hit low of the intended target. Another form of recoil anticipation is when new shooters unconsciously move the gun forward while pressing the trigger. This is very difficult for instructors to see until the shooter presses the trigger on an empty chamber. Only then can the instructor see the shooter moving the gun forward.

All forms of recoil anticipation are eliminated or reduced through practice. Good instruction in safe firearms practices is also very important.

All content from Kiddle encyclopedia articles (including the article images and facts) can be freely used under Attribution-ShareAlike license, unless stated otherwise. Cite this article:
Recoil Facts for Kids. Kiddle Encyclopedia.