A revolver is a type of gun. Revolvers are repeating firearms with a cylinder that spins. Revolvers have several chambers each holding one cartridge. Most are handguns, but other types of weapons also use revolving cylinders. They are also called revolving guns, though revolver is used far more often. The first revolvers date back to late 1500s in Europe. It was not until the 1700s or 1800s, however, they became affordable. Revolvers are sometimes used by law enforcement agencies. On some occasions, these guns can be reset by one hand, then loaded with the other. 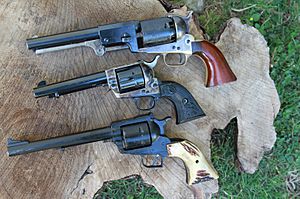 In a single-action revolver, the hammer is manually cocked. This is usually done with the thumb. This action turns the cylinder to the next cartridge. It also locks the cylinder in place with the chamber aligned with the barrel. The trigger, when pulled, releases the hammer, which fires the round in the chamber. To fire again, the hammer must be manually cocked again. This is called "single-action" because the trigger only performs a single action—that of releasing the hammer. Because only a single action is performed and trigger pull is very light, firing a revolver in this way allows most shooters to achieve greater accuracy. Additionally, the need to cock the hammer manually acts as a safety. The gun will not fire unless the hammer is cocked back. The Colt Paterson Revolver, the Walker Colt, the Colt's Dragoon and the Colt Single Action Army pistol of the American Frontier era are all good examples of this system. 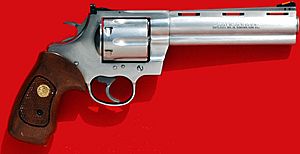 In double-action, the stroke of the trigger pull generates three actions:

Double-action means that a cocking action separate from the trigger pull is not needed. Every trigger pull causes a complete cycle and a bullet is fired. This allows the gun to be carried uncocked. It also allows the gun to be drawn from the holster and fired using only the trigger. However, a double-action revolver has a longer and harder trigger pull. However, this drawback can also be viewed as a safety feature, as the gun is safer against accidental discharges from being dropped.

Most double-action revolvers may be fired in two ways.

All content from Kiddle encyclopedia articles (including the article images and facts) can be freely used under Attribution-ShareAlike license, unless stated otherwise. Cite this article:
Revolver Facts for Kids. Kiddle Encyclopedia.