Siege of Vicksburg facts for kids 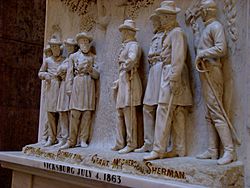 The Siege of Vicksburg (May 18 – July 4, 1863) was the final major military action in the Vicksburg campaign of the American Civil War. In a series of maneuvers, Union Maj. Gen. Ulysses S. Grant and his Army of the Tennessee crossed the Mississippi River and drove the Confederate Army of Mississippi, led by Lt. Gen. John C. Pemberton, into the defensive lines surrounding the fortress city of Vicksburg, Mississippi.

Vicksburg was the last major Confederate stronghold on the Mississippi River; therefore, capturing it completed the second part of the Northern strategy, the Anaconda Plan. When two major assaults against the Confederate fortifications, on May 19 and 22, were repulsed with heavy casualties, Grant decided to besiege the city beginning on May 25.

After holding out for more than forty days, with their supplies nearly gone, the garrison surrendered on July 4. The successful ending of the Vicksburg campaign significantly degraded the ability of the Confederacy to maintain its war effort. This action, combined with the surrender of the down-river Port Hudson to Maj. Gen. Nathaniel P. Banks on July 9, yielded command of the Mississippi River to the Union forces, who would hold it for the rest of the conflict.

The Confederate surrender on July 4, 1863, is sometimes considered, when combined with Gen. Robert E. Lee's defeat at Gettysburg by Maj. Gen. George Meade the previous day, the turning point of the war. It cut off the Trans-Mississippi Department (containing the states of Arkansas, Texas and part of Louisiana) from the rest of the Confederate States, effectively splitting the Confederacy in two for the rest of the war. Lincoln called Vicksburg "The key to the war."

All content from Kiddle encyclopedia articles (including the article images and facts) can be freely used under Attribution-ShareAlike license, unless stated otherwise. Cite this article:
Siege of Vicksburg Facts for Kids. Kiddle Encyclopedia.