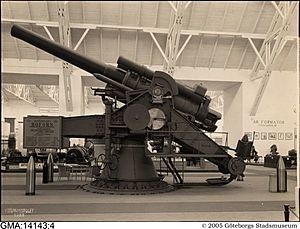 Bofors howitzer made in 1923

A howitzer is a special type of big gun used by an army. It has a short barrel, and is used fire a shell over a short distance. The barrel length of a howitzer is 15 to 25 times of the caliber. Howitzers are special because they're made to fire higher than a cannon but lower than a mortar. Howitzers are almost always used to shoot at targets on the ground, but they can be used for targets on water, or in the air. The name howitzer comes from an old Czech word, haufnice, which was a catapult that could fire many stones.

All content from Kiddle encyclopedia articles (including the article images and facts) can be freely used under Attribution-ShareAlike license, unless stated otherwise. Cite this article:
Howitzer Facts for Kids. Kiddle Encyclopedia.