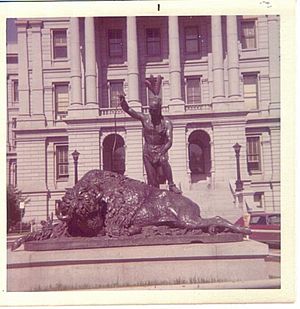 The statue The Closing of an Era at the Colorado capitol depicts an American Indian in triumph near a fallen bison. The granite for the statue came from Fremont County. The sculpture was completed for the Chicago World's Fair in 1893 by Preston Powers. Powers' friend John Greenleaf Whittier wrote the poem inscribed at the base of the monument.

The building is intentionally reminiscent of the United States Capitol. Designed by Elijah E. Myers, it was constructed in the 1890s from Colorado white granite, and opened for use in November 1894. The distinctive gold dome consists of real gold leaf, first added in 1908, commemorating the Colorado Gold Rush. The building is part of Denver's Civic Center area. It was listed on the National Register of Historic Places as part of the Civic Center Historic District in 1974, and became part of the Denver Civic Center National Historic Landmark District in 2012.

A major safety upgrade project, funded by the Colorado State Historical Fund, was started in 2001 and completed in 2009. The design by Fentress Architects added modern safety features, like enclosed stair towers, that blend in with the original architecture. The Colorado Capitol Building is featured on many of Denver's Architectural tours.

Serving as the beginning of the Capitol Hill district, the historic building sits slightly higher than the rest of downtown Denver. The main entrance hall is open 180 feet (55 m) to the top of the dome, about the height of an 18-story building. Additionally, the official elevation of Denver is measured outside the west entrance to the building, where the fifteenth step is engraved with the words "One Mile Above Sea Level". From this step, at 5,280 feet (1,609 m), the sun can be seen setting behind the Rocky Mountains. A second mile high marker was set in the 18th step in 1969 when Colorado State University students resurveyed the elevation. In 2003, a more accurate measurement was made with modern means, and the 13th step was identified as being one mile (1.6 km) high, where a 3rd marker was installed.

The interior of the building uses a large amount of Colorado Rose Onyx, a rare rose marble from a quarry near Beulah. The amount used in the building consumed the entire known supply. White Yule Marble from the quarries near Marble, Colorado was also used throughout the capitol for the floors. Many designs have been found in the marble including an image resembling George Washington and another of Molly Brown.

Many of the windows are stained glass, depicting people or events related to the history of Colorado. The halls are decorated with portraits of every president of the United States, with all the presidents from George Washington to George W. Bush being painted by Lawrence Williams. Painter Sarah A. Boardman took over from Williams, and has since painted Barack Obama, Donald Trump, and Joe Biden as well. One of the contractors for the construction of the Colorado State Capitol building was Illinois building contractor William Douglas Richardson, who was the president of the W. D. Richardson Construction Company. Richardson had participated in numerous major building contracts throughout the United States, and was interconnected with the Jacob Bunn and John Whitfield Bunn network of corporations.

All content from Kiddle encyclopedia articles (including the article images and facts) can be freely used under Attribution-ShareAlike license, unless stated otherwise. Cite this article:
Colorado State Capitol Facts for Kids. Kiddle Encyclopedia.