The town of Gunnison got its name from the first known explorer of the area, John W. Gunnison. He was searching for a route for the transcontinental railroad in 1853 and only stayed for three days before traveling west to Utah. Gunnison saw its first population increase in the 1870s, due to the mining surge throughout the state. The railroad arrived soon after in 1880 to appreciative miners, ranchers, and farmers.

In the early 1800s, the groups moving into the Gunnison area were mainly fur trappers and mountain men, trying to make a living for themselves in the rocky mountain terrain. But a drop in fur prices in the 1840s essentially cut out the need for their jobs.

The late 1850s saw the start of people joining the hunt for gold in Gunnison county. Miners were in search of placer gold, but with the growing numbers of white men in the area, this brought conflict between the Ute tribes still around the county. At least several miners were killed by these tribes and this caused some of the miners to flee the area, caring more for their lives than potential gold bonanzas.

With the mining boom, Gunnison began to see an increase of people around the 1870s. Along with the miners coming in, ranchers and farmers were among the others that lead to the Ute people becoming forced out of the area. The mining camps in Gunnison and around the county reportedly produced about 130,000 ounces of gold from the beginning of the gold rush through 1959. At the start this was mostly from placer deposits, but the largest amounts were from a by-product of silver-lead ore. The largest deposits were found along the Taylor River, as well as the Tincup and the Washington Gulch districts.

Before the railroad reached Gunnison in 1880, there was a debate as to which railroad line would claim the town as their territory. The D&RG and DSP&P were both battling for control over the area. This split the town into two sides, both disagreeing as to where the railroad depots should be placed in town. The "old" and "new" sides of town ended up agreeing to disagree and were happy to have any railroad come through town. Both lines ended up coming through town anyway, although the DSP&P shortly discontinued service to Gunnison. The D&RGW railway also was a prominent line to Gunnison for about seventy years and served as the primary means of transportation for the townspeople.

Also in 1880, the cattle industry in Gunnison was established. Realizing the poor conditions for farming (with only about eleven inches of rainfall annually and the short growing season due to the high elevation and alpine environment) the local farmers turned to ranching and began breeding cattle. To do this effectively, they had to clear and level fields for grazing purposes. Irrigation ditches also had to be cut into the ground to properly irrigate the fields in order to grow hay for the horses and cattle. Many of these practices are still in use, which can be seen while driving through and around the town to the various ranches that are still in operation.

John and William Outcalt were among the earliest settlers of Gunnison. They started their own ranch just north of town along the southeast bank of the Gunnison river. The brothers hailed from New Jersey, but decided to make the trip west for the sake of adventure and the prospect of making money. The eldest brother, John, built the irrigation system for their ranch and quickly began growing hay and other various grains. When the railroad came through town, he convinced them to expand more and ended up paying for and building the rail that ran through his property. Naming this stop Hay Spur, they produced enough hay to ship out over 800 carloads each year, which mainly headed north to the settlers of which is now the town of Crested Butte, helping feed their mules. Along with the hay, carloads of potatoes and other vegetables from the Gunnison area were being sent to Crested Butte to supply the miners with food and also to support their animals. John Outcalt is also known to be one of the most famous men in the town. He helped build the Paragon School, which is still standing today in the Gunnison Pioneer Society museum on the east end of town. Originally a shipbuilder and carpenter in New Jersey, he incorporated his skills in the building of the school which is why it is still standing today. John was also praised by the local natives; when he first arrived in town he worked as a carpenter on the Los Pinos Indian reservation, and was considered the most trusted White man in the area. This helped in the long run because, according to legend, they saved his life on numerous occasions.

Gunnison residents isolated themselves from the surrounding area during the Spanish Influenza epidemic for two months at the end of 1918. All highways were barricaded near the county lines. Train conductors warned all passengers that if they stepped outside of the train in Gunnison, they would be arrested and quarantined for five days. As a result of the isolation, no one died of influenza in Gunnison during the epidemic. This served as partial inspiration for the novel The Last Town on Earth. 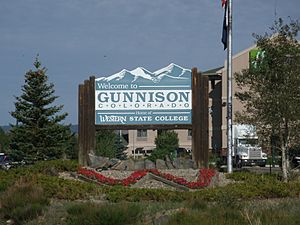 Welcome to Gunnison sign for travelers on Hwy 50 entering Gunnison from the east.

According to the United States Census Bureau, the city has a total area of 3.2 square miles (8.3 km2). All of it is land and none of it is covered by water. Gunnison is near Blue Mesa Reservoir. One can travel to Gunnison from the towns of Salida and Buena Vista by going over Monarch Pass. U.S. Highway 50 is the main east-west thoroughfare through the town. At the 2010 Census there was a population of 15,324 within the county.

The city typically experiences moderate snowfalls, with an average of 50 inches (130 cm) per year. Early fall and late spring snows are not uncommon, and snow can remain on the ground in town from as early as November to as late as April. Surrounding mountains experience very heavy snowfall with longer periods of snow on the ground. Many locations average 300–400 inches (760–1,020 cm) of snow annually. The snow is welcome to the area, as it is beneficial to water supplies and local ski resorts. Total liquid precipitation averages nearly 11 inches (280 mm) per year in the city of Gunnison, while surrounding mountains may receive anywhere from 15 to over 40 inches (380 to 1,000 mm) annually, depending upon elevation and local topography.

There were 2,318 households out of which 20.6% had children under the age of 18 living with them, 30.6% were married couples living together, 7.1% had a female householder with no husband present, and 57.2% were non-families. 34.9% of all households were made up of individuals and 7.2% had someone living alone who was 65 years of age or older. The average household size was 2.2 and the average family size was 2.9. 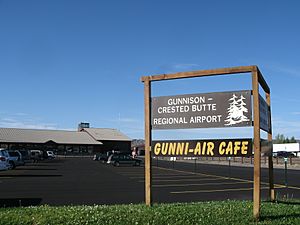 The League of American Bicyclists has awarded Gunnison the silver level in bicycle friendliness.

Activities during the summer in Gunnison include fishing on the Gunnison River, Tomichi Creek and Blue Mesa Reservoir. Hiking in any of the numerous areas within a short distance of town like Curecanti National Recreation Area, Tomichi State Wildlife Area, Sapinero State Wildlife Area, McIntosh State Wildlife Area. Biking activities include road biking and mountain biking; Hartman's Rock has many bike trails for mountain biking as well as motorcross and rock climbing. One rafting practice is to rent a raft in Almont and drift 10 miles (16 km) down the Gunnison River to the town of Gunnison. Below the Hwy 50 bridge on the Gunnison river is the kayak park. The Gunnison Ranger District Office located at 216 North Colorado Street offers maps and information about details particular to vehicle access, private, BLM, federal and state properties, trails, and other areas of interest.

A rodeo in Colorado takes place over a 10-day period in July featuring PRCA Rodeo activities as well as family-based activities. Cattlemen’s Days celebrated its 112th year of rich western heritage in a first class and nationally recognized rodeo event for the year 2012. In 2011, this rodeo was nominated as one of the five finalists for Mid-sized rodeo of the year. It continues to be a leader in PCRA rodeos in fund-raising for breast cancer with their Tough enough to wear pink campaign. Cattlemen’s Days also offers scholarships to support and further the education of 4-H and FFA exhibitors.

All content from Kiddle encyclopedia articles (including the article images and facts) can be freely used under Attribution-ShareAlike license, unless stated otherwise. Cite this article:
Gunnison, Colorado Facts for Kids. Kiddle Encyclopedia.