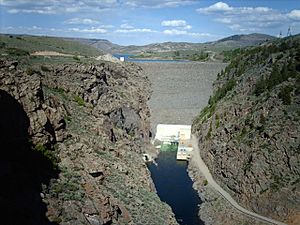 The centerpiece of the plans for the Gunnison was the construction of four dams on a 40-mile stretch of the river east of the National Park Service's Black Canyon of the Gunnison National Park, projects that would not only help control the amount of water flowing into the Colorado, but would also create new opportunities for flood control, water storage, and the generation of hydroelectric power. The first of these dams was Blue Mesa Dam, which was begun in 1962 approximately 30 miles west of Gunnison, and 1.5 miles west of Sapinero. Finished four years later, the dam created Blue Mesa Reservoir, which became the primary water storage reservoir for the Curecanti Unit (later renamed the Wayne N. Aspinall Unit).

Blue Mesa Dam is located on the Gunnison river approximately 30 miles west of the city of Gunnison, near the intersection of U.S. 50 with Colorado Highway 92, which travels along the top of the dam. The reservoir extends east 20 miles and is composed of three main basins, the Iola, the Cebolla and the Sapinero, from east to west. U.S. 50 traverses the northern shore of both the Iola and Cebolla Basins before crossing the reservoir south on the Middle Bridge and continuing west to the dam. 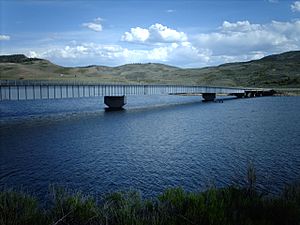 The southern shore of the Iola Basin can be reached via Colorado Highway 149, which begins at an intersection with U.S. 50 at the Lake City Bridge, approximately 7 miles west of the city of Gunnison. While most of the recreational areas at Blue Mesa can be accessed from U.S. 50, the reservoir also contains a small number of facilities on the lake's deep arms, such as Cebolla Creek and Soap Creek, which can only be reached by boat or unpaved road.

While it was the Bureau of Reclamation that conceived of the plan to impound the Gunnison and constructed the Blue Mesa Dam, it was the National Park Service that was tasked with developing and managing recreational facilities at Blue Mesa Reservoir and the two smaller lakes to the west. As a unit of the Curecanti National Recreation Area Blue Mesa Reservoir offers a number of recreational opportunities, including boating, fishing, boat-in, developed, and primitive camping, hiking, horseback riding, and hunting. A popular lake for boating, Blue Mesa has marinas at Elk Creek and Lake Fork, near the dam, both of which can be accessed by U.S. 50. Watercraft can also be launched from the Ponderosa and Stevens Creek campgrounds, and at Iola, on the reservoir's southern shore. During winter months Iola Basin is also a popular spot for ice fishing. 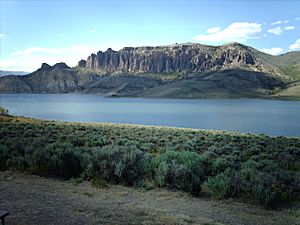 Blue Mesa contains 8 developed campgrounds, two of which are designated for groups. These range from the 160-site Elk Creek on the main body of the lake to smaller, more remote sites like Ponderosa and Gateview located on arms of the lake. Several of the campsites can accommodate RV's, but only Elk Creek offers electrical hook-ups. Boaters may camp overnight in 4 free camping areas with a total of 9 individual sites. Boaters may also camp on the southern shore of the Cebolla and Iola Basins, as long as campsites are not within a half-mile of any developed area, bridge, maintained public road or other boat-in/backcountry campsite.

In addition to Blue Mesa Reservoir, Curecanti NRA also contains two other Bureau of Reclamation projects, Morrow Point Reservoir and Crystal Reservoir. Part of the same project that created Blue Mesa, both Morrow Point and Crystal are smaller, narrower lakes, located within the Black Canyon of the Gunnison. Though considerably harder to access than Blue Mesa, these two lakes nevertheless offer visitors unique views and challenging recreational opportunities. West of Blue Mesa and immediately downriver from Crystal Dam is Black Canyon of the Gunnison National Park, a National Park Service unit that offers camping, hiking, and views of the river and the surrounding 1900-ft. deep canyon. North of the reservoir is the Gunnison Ranger District of the Grand Mesa, Uncompahgre and Gunnison National Forests, a unit of the U.S. Forest Service. The Gunnison Ranger District includes almost 30 campgrounds and a number of hiking and equestrian trails spread across 1.3 million acres. Towns near Blue Mesa include Gunnison to the east and Montrose and Delta to the west, all of which can be accessed via U.S. 50.

All content from Kiddle encyclopedia articles (including the article images and facts) can be freely used under Attribution-ShareAlike license, unless stated otherwise. Cite this article:
Blue Mesa Reservoir Facts for Kids. Kiddle Encyclopedia.