The Town of Marble is a Statutory Town in Gunnison County, Colorado, United States. The town population was 131 at the 2010 United States Census. 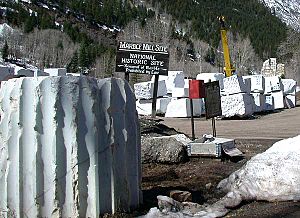 Blocks of cut marble at the historic quarry in Marble

The Town of Marble was first incorporated in 1899. Marble remains a statutory town of the State of Colorado today.

The town is the location of a historic Yule Marble quarry along the mountains that began operations in the late 19th century, and from which the town draws its name. The marble of the quarry is considered to be of exceptional quality and has been used for the Tomb of the Unknowns, as well as for parts of the Lincoln Memorial in Washington, D.C., and civic buildings in San Francisco. It was also used for the construction of the Equitable Building, a historically important early skyscraper in New York City.

The quarry has enjoyed a renaissance since its acquisition in 2004 by Polycor, a Canadian-based dimension stone company. In spite of significant transportation costs, this high-quality stone is now exported in large quantities to Europe and Asia for transformation and use throughout the world, as well as being sold into the US market.

In the late 20th century and the 21st century, Marble has become a summer tourist destination, benefiting from the quarry's renown. It is also the gateway to the nearby Crystal townsite. It is the site of the Marble/marble sculpting symposium [1] held every summer since 1988.

Seven sites within Marble have been listed on the National Register of Historic Places.

The community is located in a valley of the upper Crystal River along the Elk Mountains, accessible by a paved road from State Highway 133. Unlike most of Gunnison County, the town is located on the north side of Schofield Pass and thus is separated geographically from the rest of Gunnison county.

There were 45 households out of which 22.2% had children under the age of 18 living with them, 60.0% were married couples living together, and 40.0% were non-families. 26.7% of all households were made up of individuals and 4.4% had someone living alone who was 65 years of age or older. The average household size was 2.33 and the average family size was 2.89.

All content from Kiddle encyclopedia articles (including the article images and facts) can be freely used under Attribution-ShareAlike license, unless stated otherwise. Cite this article:
Marble, Colorado Facts for Kids. Kiddle Encyclopedia.