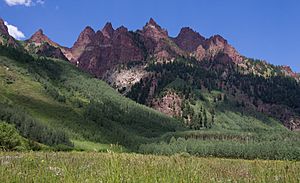 The Elk Mountains are a high, rugged mountain range in the Rocky Mountains of west-central Colorado in the United States. The mountains sit on the western side of the Continental Divide, largely in southern Pitkin and northern Gunnison counties, in the area southwest of Aspen, south of the Roaring Fork River valley, and east of the Crystal River. The range sits west of the Sawatch Range and northeast of the West Elk Mountains. Much of the range is located within the White River National Forest and the Gunnison National Forest, as well as the Maroon Bells-Snowmass Wilderness and Raggeds Wilderness. The Elk Mountains rise nearly 9,000 ft. above the Roaring Fork Valley to the north. 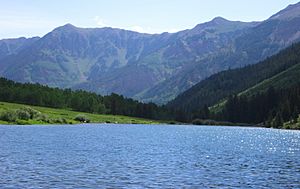 Additional notable peaks in the range include:

The range provides a formidable barrier to travel and is traversed only by backroad passes and trails, including Schofield Pass, Pearl Pass, and Taylor Pass. State Highway 133 traverses McClure Pass, at the western end of the range. The range has been the site of mining activity since the days of the Colorado Silver Boom, which saw the founding of mining towns such as Aspen and Ashcroft. In the late 19th century, the western and southern flank of the range became the site of intense coal mining activity which continues to the present day. Treasure Mountain, overlooking the town of Marble, is home to the famous Yule Marble Quarry. Quarried marble was used to create The Tomb of the Unknowns, the Lincoln Memorial, Denver Post Office and other buildings. The range receives a great deal of snowfall due to its position to the west of the continental divide and the westerly origin of many winter storms. This is exploited by the ski areas in the vicinity of Aspen, which are located on the flanks of smaller mountains alongside the Roaring Fork Valley.

All content from Kiddle encyclopedia articles (including the article images and facts) can be freely used under Attribution-ShareAlike license, unless stated otherwise. Cite this article:
Elk Mountains (Colorado) Facts for Kids. Kiddle Encyclopedia.