Capitol Peak is a high and prominent mountain summit in the Elk Mountains range of the Rocky Mountains of North America. It is the 52nd highest mountain in North America. The 14,137-foot (4,309 m) fourteener is located in the Maroon Bells-Snowmass Wilderness of White River National Forest, 8.7 miles (14.0 km) east by south (bearing 104°) of the community of Redstone in Pitkin County, Colorado, United States.

Capitol Peak lies on the long ridge connecting the heart of the Elk Mountains with Mount Sopris to the northwest. Capitol Peak is notable for its impressive vertical relief, rising nearly 9,000 feet above the Roaring Fork Valley.

Capitol Peak is one of the most difficult of Colorado's fourteeners to climb. The only non-technical route, the Northeast Ridge, requires crossing the famously exposed "Knife Edge," the northeast ridge of Capitol. Fatalities have occurred on this route. Other routes require technical rock climbing, for example, the Northwest Buttress Route (Grade IV, Class 5.9). These routes have significant rockfall danger due to a great deal of loose rock; however, the rock is substantially more solid than on the more famous Maroon Bells or on Pyramid Peak. 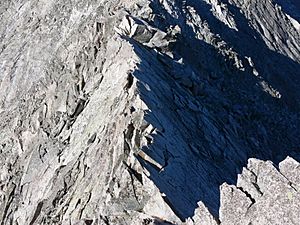 Capitol Peak is a 15.1 mile lightly trafficked out and back trail located near Snowmass Village, Colorado that features a lake and is only recommended for very experienced adventurers. The trail is primarily used for hiking, rock climbing, and backpacking and is best used from July until September. Dogs are also able to use this trail.

From the parking lot, hikers will hike 5.7 miles before arriving at the Capitol Peak campsite. Another 1.9 Miles is hiked to K2 and the summit. K2 is a peak that is often confused by hikers as the Capitol Peak summit. 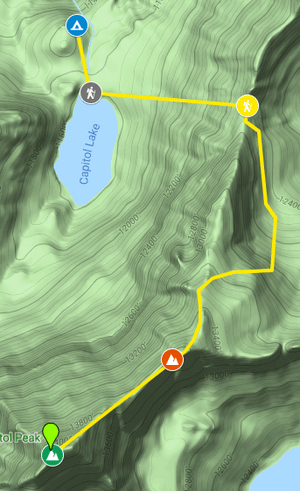 There is primitive camping near trail head in a designated site. No fee is required, but restrictions may exist.

At the trail head, at an altitude of 9,400 feet, following several switchbacks for half a mile will lead you to Daly Pass. Daly Pass is the first point of interest on Capitol Peak. This pass is recognized for its saddle-shaped ridge reaching 12,480 feet. After the pass, there is no more easy hiking till the summit. 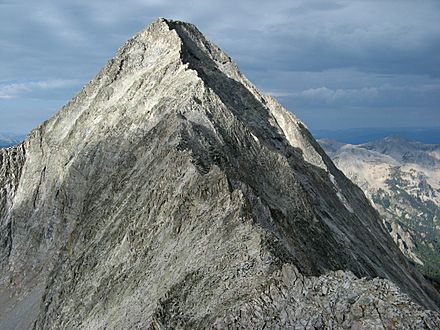 K2 is known for often being confused by hikers with the Capitol Peak summit. Most hikers will go around the right side where it is most exposed, but fatality rates are much higher when one goes around.

Knife edge (pictured above) is famous for its 150-foot length, with 2,000 foot drops on both sides. Daredevils will walk across it in a timely manner, but other hikers may scooch across it like straddling a horse. This is where most deaths occur on the Capitol Peak Trail.

The view from Capitol Peak's summit includes Pierre Lakes in the huge cirque to the east. To the south is Snowmass Mountain, another Fourteener, at the end of a long shattered ridge. Farther to the east are red-striated peaks, including the Maroon Bells, Pyramid Peak, and Castle Peak. The long ridge of the Continental Divide is to the east.

All content from Kiddle encyclopedia articles (including the article images and facts) can be freely used under Attribution-ShareAlike license, unless stated otherwise. Cite this article:
Capitol Peak (Colorado) Facts for Kids. Kiddle Encyclopedia.