Crested Butte is a home rule municipality in Gunnison County, Colorado, United States. The town population was 1,487 at the 2010 United States Census. The former coal mining town is now called "the last great Colorado ski town". Crested Butte is a destination for skiing, mountain biking, and a variety of other outdoor activities.

The Colorado General Assembly has designated Crested Butte the Wildflower Capital of Colorado.

The East River Valley where Crested Butte is located was once used as a summer residence by the Ute people. However, they were quickly displaced when European-Americans first entered the area. The first whites to explore the valley were beaver trappers, shortly followed by surveyors. Captain John Gunnison, after who Gunnison County is named, was one of the early explorers to enter the area. 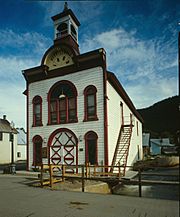 In the 1860s and 1870s coal and silver mines began to open in the surrounding area, and many little mining towns formed. However, when silver mining began to decline, many of these towns failed. Crested Butte, however, was in a better position to survive because it served as a supply town to the surrounding area.

Another industry that served to support Crested Butte was ranching.

When the coal mines closed, the town began to shrink, and eventually the local high school was closed. Students had to travel to Gunnison to go to high school. The town did not revive until a ski area was built on Crested Butte Mountain in the 1960s. From the 1960s to 1990, the Crested Butte public school only facilitated K-5 students, while 6th grade and higher attended school in Gunnison. In 1990 Crested Butte offered middle school in the railroad depot building. In 1992 a new middle school was completed which allowed the public school to facilitate grades K through 8. Finally in 1997, a new facility for the Crested Butte Community School was completed. This included the addition of a public high school so that the school now serves students in grades K-12.

In 1993 the Crested Butte Academy opened in Crested Butte, bringing a private high school into town. However, on 9 July 2008, the academy was closed permanently due to financial difficulties that had plagued its entire existence. 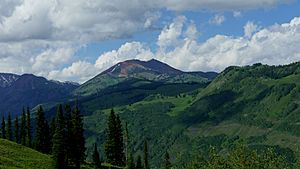 Since the 1970s, several companies have attempted to mine molybdenum on Mount Emmons (called the "Red Lady") near Crested Butte. In 1977 W Mitchell was elected mayor of Crested Butte and led a campaign which stopped AMAX (now Freeport-McMoRan) from building a billion-dollar molybdenum mine on Mount Emmons. Because of his battle against the anticipated environmental impact, Mitchell is known as the man who "saved a mountain". The same year, 1977, saw the formation of the High Country Citizens' Alliance (HCCA), an environmental organization dedicated to protecting natural resources within the Upper Gunnison River Valley.

Currently the rights for Mount Emmons molybdenum are owned by U.S. Energy Corp. On 25 April 2011, Thomson Creek Metals announced that it had terminated its option agreement with U.S. Energy Corp. to acquire an interest in the Mount Emmons molybdenum project. Although US Energy continued to maintain its commitment to moving the project forward on its own behalf, the withdrawal of Thomson Creek Metals was heralded as a major victory in the town of Crested Butte in its battle against the proposed molybdenum mine. 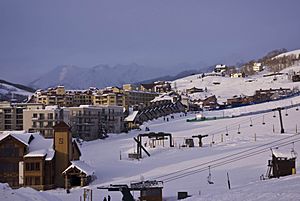 The primary winter activity in Crested Butte is skiing or snowboarding at nearby Crested Butte Mountain Resort in Mount Crested Butte. Backcountry skiing in the surrounding mountains is some of the best in Colorado. The mountain, Crested Butte, rises to 12,162 feet (3,707 m) above sea level. The ski area base is at 9,375 feet (2,858 m). 14 lifts serve 1,058 acres (4.28 km2) of terrain. 448 acres (1.81 km2) of the terrain are double black diamond runs. The large amount of extreme skiing terrain at Crested Butte has attracted the US Extreme Skiing Championships and the X Games. The longest run on Mount Crested Butte is 2.6 miles (4.2 km).

The town of Crested Butte itself has a Nordic Center which has an ice skating rink as well as many miles of groomed cross-country skiing trails. 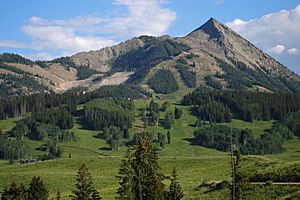 Crested Butte is one of the locations that claims to have created the sport of mountain biking. The Mountain Bike Hall of Fame used to be located in Crested Butte before moving to Fairfax, California, in 2014. Other popular summer activities in Crested Butte include hiking, backpacking, rock climbing, whitewater rafting and kayaking, four wheeling, disc golf, and fishing.

Crested Butte is located in north-central Gunnison County on the west side of the valley of the Slate River, along Coal Creek. Colorado State Highway 135 runs south from Crested Butte 27 miles (43 km) to Gunnison, the county seat. According to the United States Census Bureau, the town of Crested Butte has a total area of 0.85 square miles (2.2 km2), all of it land. Crested Butte lies at an elevation of 8,885 feet (2,708 m) above sea level.

The town from a chairlift at Crested Butte Mountain Resort

Climate type is dominated by the winter season, a long, bitterly cold period with short, clear days, relatively little precipitation mostly in the form of snow, and low humidity. The Köppen Climate Classification sub-type for this climate is "Dfc" (Continental Subarctic Climate).

There were 692 households out of which 19.1% had children under the age of 18 living with them, 28.9% were married couples living together, 5.1% had a female householder with no husband present, and 63.3% were non-families. 28.3% of all households were made up of individuals and 1.4% had someone living alone who was 65 years of age or older. The average household size was 2.21 and the average family size was 2.69.

Crested Butte was the setting and main filming location for the Walt Disney ski movie Snowball Express starring Dean Jones and Harry Morgan. 1970s musicians Brewer & Shipley wrote and performed a song called "Crested Butte" dedicated to the town. Crested Butte is the birthplace and hometown of Heidi Montag of MTV's The Hills. It is also the town Bud Light took over for a weekend in 2014 and renamed "Whatever, USA".

James Cameron's movie Avatar has very tangible parallels to Crested Butte with regard to both mining issues and environmental coexistence. One of the people who led the fight against the proposed molybdenum mine on Mount Emmons in the late 1970s, former mayor W Mitchell, uses a wheelchair, just like the protagonist in Cameron's film. James Cameron has spent a lot of time at his wife Suzy Amis's cabin in Crested Butte.

Aliens vs. Predator: Requiem is set in Gunnison County. "CRESTED BUTTE" is given as the destination of the bus in which Dallas Howard arrives at Gunnison at the beginning of the movie.

In 2014, Powder Magazine's "Ski Town Throw Down" voted Crested Butte as the number 1 ski town in the United States.

All content from Kiddle encyclopedia articles (including the article images and facts) can be freely used under Attribution-ShareAlike license, unless stated otherwise. Cite this article:
Crested Butte, Colorado Facts for Kids. Kiddle Encyclopedia.