Monarch Ski and Snowboard Area is a ski resort located in the state of Colorado. It is twenty miles (32 km) west of Salida, Colorado, on U.S. Highway 50. The resort is situated on Monarch Pass at the continental divide. It has 54 trails, two terrain parks, and an extreme terrain area called Mirkwood. The Monarch Mountain Lodge is located three miles (5 km) east of the ski area in the town of Garfield, Colorado.

Monarch is open daily from 9:00 a.m. to 4:00 p.m. from mid-November to early April. Monarch Ski Area is advertised as a locals' mountain and charges lower lift-ticket prices than most mountain resorts in Colorado. 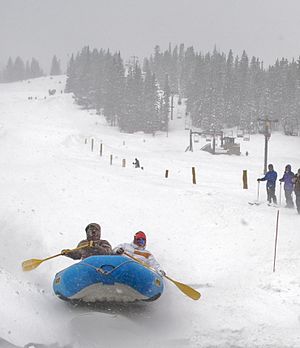 Monarch first opened in 1939, with one rope tow running up the run named Gunbarrel: a long, steep, heavily-moguled run on the south side of the area. The tow rope was powered by a Chevy engine when it was first opened.

Monarch has been owned and sold many times and is currently owned by many separate parties, none owning more than 25%.

The run formerly known as Slo-Motion was developed into the K2 terrain park in 2008. It is composed of all-natural features, including logs, stumps, and jumps. The run can be used by anyone, even if they have no intent of using any of the features. It is now known as the Never Summer terrain park.

There is a small park at the base of the panorama double chairlift.

All content from Kiddle encyclopedia articles (including the article images and facts) can be freely used under Attribution-ShareAlike license, unless stated otherwise. Cite this article:
Monarch Ski Area Facts for Kids. Kiddle Encyclopedia.