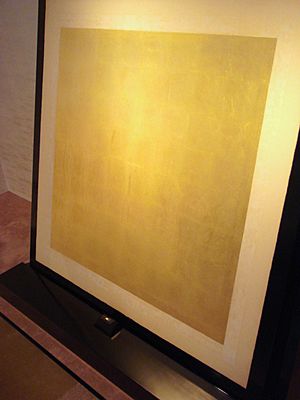 Gold leaf is gold that has been hammered into thin sheets by goldbeating. It is often used for gilding. The most commonly used gold is 22-karat yellow gold. Layering gold leaf over a surface is called gold leafing or gilding.

Gold leaf is sometimes used in art without a gilding process. In many cultures, it was used to wrap objects such as bullae. It has been used in jewellery.

Gold leaf has traditionally been used as a gilding material to decorate art or the picture frames. Gold leaf paintings were used in mosaics in later Early Christian art. Gold leaf is also used in Buddhist art to decorate statues and symbols. Gold leafing can also be seen on domes in religious and public architecture.

Gold leaf has long been used in architecture. It was used in Byzantine and Roman churches and basilicas in 400 AD.

Gold leaf is sometimes used to decorate food or drink. It is sometimes found in desserts and confectionery. When used as a food additive, gold has the E-number E175.

All content from Kiddle encyclopedia articles (including the article images and facts) can be freely used under Attribution-ShareAlike license, unless stated otherwise. Cite this article:
Gold leaf Facts for Kids. Kiddle Encyclopedia.