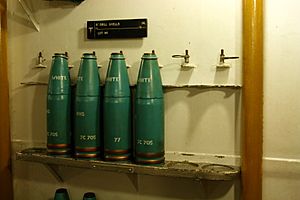 Shells used on the HMS Belfast

A shell is a type of projectile used in weapons. It is filled with explosive or other things such as an incendiary device. It is similar to a bomb but is made to be shot out of a gun. Shells are usually large caliber projectiles fired by artillery, armored vehicles (including tanks), and warships. A fuze detonates the explosive or releases whatever else the shell may be carrying.

Anti-tank guns fire thick shells without much explosive inside. Shells usually have the shape of a cylinder but taper towards the front end to form a point. However, special shells may use other shapes.

All content from Kiddle encyclopedia articles (including the article images and facts) can be freely used under Attribution-ShareAlike license, unless stated otherwise. Cite this article:
Shell (projectile) Facts for Kids. Kiddle Encyclopedia.