Paths of three objects thrown at the same angle (70°) but at different speeds. 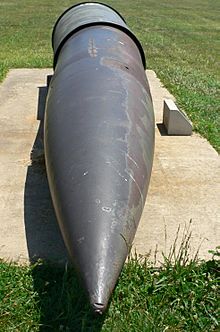 Projectile and cartridge case for the massive World War II Schwerer Gustav artillery piece. Most projectile weapons use the compression or expansion of gases as their motive force.

A projectile is something that is sent flying through the air, usually as a weapon. Any solid object that is thrown or fired out of something is a projectile. For example, an arrow fired from a bow, a bullet, or even a rock from a slingshot are all projectiles.

All content from Kiddle encyclopedia articles (including the article images and facts) can be freely used under Attribution-ShareAlike license, unless stated otherwise. Cite this article:
Projectile Facts for Kids. Kiddle Encyclopedia.