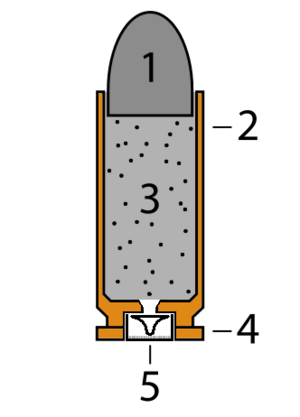 A modern cartridge has these parts:
1. the bullet;
2. the case, which holds all parts together;
3. the gunpowder;
4. the rim, part of the casing used for loading;
5. the percussion cap or primer, which explodes to light the gunpowder.

Although the word "bullet" is often used for a cartridge round, a bullet is not a cartridge but rather a part of one. A round of ammunition cartridge includes the bullet (which is the projectile), the case (which holds everything together), the propellant (which provides most of the energy to shoot it) and the primer (which ignites the propellant). 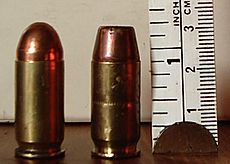 Bullet designs have to solve two main problems. A bullet must fit tightly in the gun's bore (inside of the barrel). If it does not fit tightly, gas from the burning gunpowder leaks past the bullet and does not help push it out. The bullet must also fit tightly against the rifling (spiral grooves cut into the barrel), but not so tightly that it causes damage. Bullets must have this tight fit without causing too much friction. Bullets must be made to a high standard. Poorly made bullets may not be accurate. Poorly made bullets can damage the gun or hurt the person using the gun. The way the bullet behaves in the barrel is called 'internal ballistics'.

The laws of physics can be used to understand how a bullet moves after it leaves the barrel. The way the bullet behaves after it leaves the barrel is called 'external ballistics'. The main factors affecting the aerodynamics of a bullet in flight are the bullet's shape and the rotation from the rifling of the gun barrel. Spinning helps stabilize the bullet gyroscopically and aerodynamically (spinning keeps it on track). Any small differences in the shape of the bullet are mostly canceled as it spins. The first guns did not have rifling. With smoothbore firearms (no rifling), a round bullet was best because it was the same in any position. But these bullets were not very stable. They were also not very accurate. Still, the round shape of bullets did not change very much for hundreds of years.

Bullet design also affects what happens when a bullet hits an object. The way a bullet behaves when it hits a target is called 'terminal ballistics.' The make-up and density of the target material, the angle at which the bullet hits, and the speed and design of the bullet itself are all factors. Bullets are usually made to go into a target, change shape, and/or break apart. For a given material and bullet, the speed of the bullet is the main factor determining what happens.

Making bullets go faster increases the kinetic energy even more. This effect is big, so people have tried (and succeeded) to make bullets that go faster and weigh less. Modern firearms take much lighter bullets and shoot them much faster than was the case in World War I. This makes the firearms better in two ways. The magazine (which holds the cartridges in the gun before they are fired) holds more of the smaller, lighter bullets. Also, the higher speed causes much more damage than the old-style bullets. 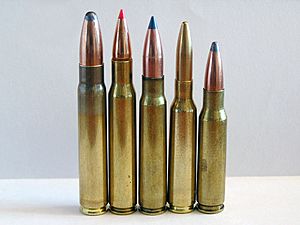 Rifles are used for target shooting and killing. A rifle bullet can be described by its accuracy, penetration, shape, size, and mass (weight). There are many different kinds of rifle bullets.

The Full Metal Jacket (FMJ) is a type of bullet commonly used by the military. A lead center (core) is surrounded by a strong metal coating (jacket). This jacket is usually made of a copper alloy, but sometimes it is made of steel. The FMJ does not spread out when it hits a target. It goes deep into its target and is a general-purpose bullet. The FMJ is not recommended for hunting. It is mostly for target shooting and military use.

The Jacketed Hollow Point (JHP) has a lead center (core) with lead showing at the tip. It also has a strong metal coating (jacket). The center of the tip has a hole in it (hollow point). This design makes the tip of the JHP quickly start to spread out (expand) when it hits a target. The hollow point bullet in a rifle can be as small as a pin. When the hollow point is this small, the bullet will go faster and still spread out when it hits a living target. In some hollow point rifle bullets, the front may spread out to two times as wide as the bullet was when it started. It is a good hunting bullet because the energy in the bullet is transferred to the target at a known depth. The jacketed hollow point tends to be accurate and is sturdy.

A solid copper bullet is a bullet that has no lead core or other elements than copper. This bullet expands into a flower shape when it hits a target, because copper bullets are usually hollow point. The copper bullet contains no lead, so it is also better for the environment. In rifles, it is widely used for hunting and other sports.

A frangible bullet will break into many pieces upon contact with any material harder than itself. This bullet is used for safety while shooting. It has little impact on the environment. It also makes the objects behind the intended target a little safer. 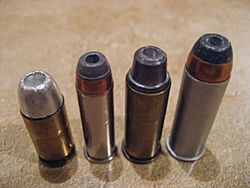 Handguns are mostly used for sport target shooting or self-defense. Police use the pistol because they can easily carry it and have it ready to use.

A flat nosed bullet is mostly used in handguns, although there are also some rifle bullets called flat nosed. The flat nose on a pistol bullet can be as wide as the bullet. The "flat nose" on a rifle bullet may be much smaller. The flat nosed bullet tends to have a low ballistic coefficient. This means that it slows down faster than pointed bullets. Flat nosed bullets are sometimes used to prevent the explosion of the next cartridge in a magazine when the gun recoils. Flat nosed bullets also spread out quickly when they hit a target. This makes them useful for fighting at close range when the bullet should not hit what is behind the target. After hitting the target, it becomes almost inside out.

A frangible pistol bullet will break apart on contact. It is usually made of a copper jacket over pieces of either round or twisted lead pieces that are glued together. The glue breaks apart when the bullet hits the target. The pieces spread out. This creates a larger surface area. This kind of bullet cannot go deep into a target. It is safer to use when it is important not to hit anything on the other side of the target.

All content from Kiddle encyclopedia articles (including the article images and facts) can be freely used under Attribution-ShareAlike license, unless stated otherwise. Cite this article:
Bullet Facts for Kids. Kiddle Encyclopedia.