In ballistics, the ballistic coefficient (BC) of a bullet is a measure of its power to be stronger than air resistance in flight. A high BC means the bullet will slow down less. It will have more of its speed left when it reaches the target. BC depends on mass, diameter, and drag coefficient. Ballistic coefficients have units of lb/in² or kg/m². BCs for bullets are normally stated in lb/in² by their manufacturers. It is so common that the measurements don't usually say lb/in². The values for BC can be as low as 0.12 and as high as 1.00 for commonly used bullets. 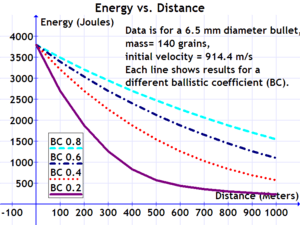 Bullets with higher BC keep more energy as they travel.

A bullet with a high BC will travel farther than one with a low BC since it will keep its speed better, resist the wind better, and “shoot flatter” (see external ballistics).

When hunting with a rifle, a higher BC is good for several reasons. A higher BC results in a flatter flight. This makes the shooter less likely to miss the target because of the bullet dropping during flight. The shooter does not have to try to guess his distance from the game animal and then guess how much the bullet will drop before it hits the target area on the animal.

This difference in flight path becomes more important at longer distances. Sometimes, the difference between a bullet with a high BC and a low BC can result in a space of 30 cm (1 foot) at 500 meters (550 yards). A bullet with a high BC arrives at the target faster and with more energy than one with a low BC. Since the higher BC bullet gets to the target faster, it is also less affected by crosswinds.

Sporting bullets have BCs in the range of 0.12 to slightly over 1.00. The higher the number, the more aerodynamic the bullet is. Very-low-drag bullets with BCs ≥ 1.10 can be designed and made on special lathes. These special bullets often have to be fired from custom-made full bore rifles with special barrels. 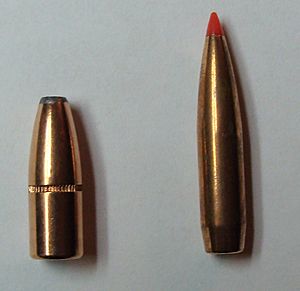 Differences in air density in areas where the bullets are fired can affect the measurements. Therefore, Ballistic coefficients are not exact measurements; they are averages.

To find the correct BC (some scientists would call it drag coefficients), Doppler radar-measurements are required. The average person does not have this equipment. Weibel 1000e Doppler radars are used by governments, professional ballisticians, defense forces, and a few ammunition manufacturers to get exact real-world data on the flight behavior of bullets of interest.

Like any experiment, bullets are fired several times and measurements are taken and averaged. The results are then listed as that bullet's BC.

There are free computer programs that can be used to calculate ballistic coefficients if other information is known.

All content from Kiddle encyclopedia articles (including the article images and facts) can be freely used under Attribution-ShareAlike license, unless stated otherwise. Cite this article:
Ballistic coefficient Facts for Kids. Kiddle Encyclopedia.