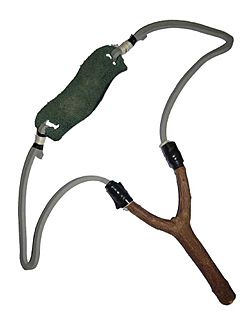 A slingshot is a kind of projectile weapon which is used to launch small things. It is small and made to be handheld. It is made of a Y-shaped body with an elastic band such as rubber tied to the two top ends of the Y. The projectile is placed in the band, which is pulled back and let go of.

How strong and dangerous the slingshot is depends on how it is made and especially the elastic band. Although a slingshot is a type of weapon and a strong one can hurt people, they are not often used in modern war because there are many better weapons. Strong slingshots may be used to hunt small animals, or weaker ones may be used as toys.

In some places, a slingshot may be illegal because it can be a weapon.

All content from Kiddle encyclopedia articles (including the article images and facts) can be freely used under Attribution-ShareAlike license, unless stated otherwise. Cite this article:
Slingshot Facts for Kids. Kiddle Encyclopedia.