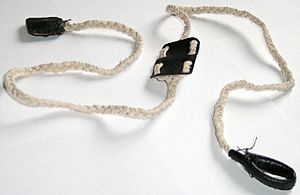 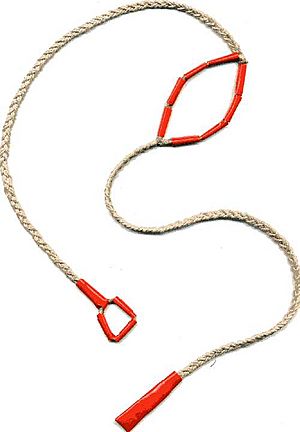 A sling is a type of weapon which involves swinging a rock round to gain speed before throwing it. The sling is an ancient weapon which was used in the Roman Empire. A skillful slinger can hit a target 10x10 cm at 20 metres distance. A sling has operational range for some 200 metres.

The most famous user of sling was David, the future king of Israel, who killed Goliath by slinging a stone on his forehead.

In the Middle Ages, Spanish peasants used slings against Moorish cavalry. A hit on the horse's head could kill the horse.

All content from Kiddle encyclopedia articles (including the article images and facts) can be freely used under Attribution-ShareAlike license, unless stated otherwise. Cite this article:
Sling (weapon) Facts for Kids. Kiddle Encyclopedia.