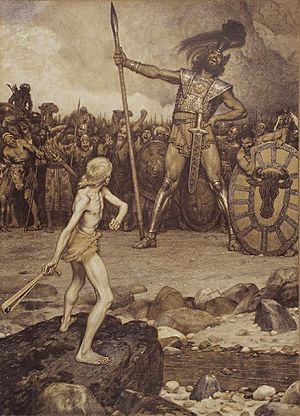 Goliath (Hebrew: גָּלְיָת,) was a Philistine warrior in the Old Testament. He was the champion of the warriors of town of Gath. The name refers to Greek name Alyattes.

Goliath was unusually large. His height was said to be "six cubits and a span" - some 290 cm - and he fought as armoured charioteer. The Bible describes how he challenged the Israelite warriors for single-handed duel, but nobody dared to fight with him.

David, who was fourteen years old at this time, finally answered to challenge. He was skilled on use of sling, and he found out a way how he could win him. He accurately slung a stone on Goliath's forehead, just below his helmet. The stone knocked Goliath out. David then ran to unconscious Goliath, pulled his sword off the scabbard, and cut his head off. Seeing a fourteen-year-old boy killing their champion, the Philistine army demoralized.

The Dead Sea Scrolls say Goliath's height was a more credible "four cubits and a span", in modern measurements 202 cm. At the era when man's average height was some 160 cm, he would still have looked like a giant.

All content from Kiddle encyclopedia articles (including the article images and facts) can be freely used under Attribution-ShareAlike license, unless stated otherwise. Cite this article:
Goliath Facts for Kids. Kiddle Encyclopedia.