The Dead Sea Scrolls is about 1,000 documents. They include texts from the Hebrew Bible. They were found between 1947 and 1979 in eleven caves in and around the Wadi Qumran (near the ruins of the ancient settlement of Khirbet Qumran, on the northwest shore of the Dead Sea) in the West Bank. The religious and historical texts are very important as they include practically the only known surviving copies of Biblical documents made before 100 CE. They show evidence of many different beliefs and practices within late Second Temple Judaism. 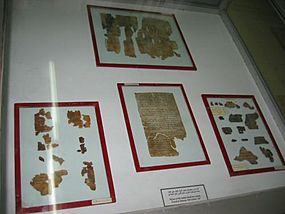 Fragments of the scrolls on display at the Archaeological Museum, Amman 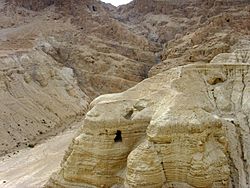 The caves in which the scrolls were found

All content from Kiddle encyclopedia articles (including the article images and facts) can be freely used under Attribution-ShareAlike license, unless stated otherwise. Cite this article:
Dead Sea scrolls Facts for Kids. Kiddle Encyclopedia.