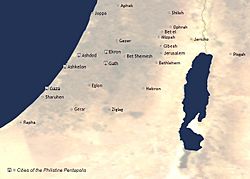 The Philistines ( or Hebrew: פְּלִשְׁתִּים‎‎, Plištim) were a people described in the Bible. During the Judges period they were one of the Israelite's most dangerous enemies. Biblical scholars have connected the Philistines to other biblical groups such as Caphtorim and the Cherethites and Pelethites. Both have been identified with Crete, and leading to the tradition of an Aegean origin.

All content from Kiddle encyclopedia articles (including the article images and facts) can be freely used under Attribution-ShareAlike license, unless stated otherwise. Cite this article:
Philistines Facts for Kids. Kiddle Encyclopedia.