The Sea Peoples are supposed to be a seafaring confederation that attacked ancient Egypt and other parts of the East Mediterranean. The time was before and during the Bronze Age collapse (1200–900 BC). 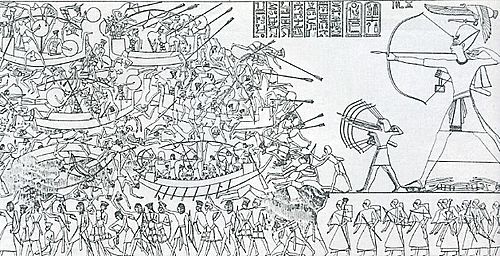 This famous scene is from the north wall of the Medinet Habu temple. It is often used to illustrate the Egyptian campaign against the Sea Peoples in 'the Battle of the Delta'. The hieroglyphs do not name Egypt's enemies, which are described as being from "northern countries". Early scholars noted the hairstyles and accessories worn by the combatants are similar to other reliefs in which such groups are named.

During the Bronze age collapse, archeological evidence shows the destructions of many cities on the coastlines of the Levant and the Aegean Sea. That may have been caused by invaders from the sea. The exact origins and cultures of the attackers are unknown and so historians call them the Sea Peoples.

Some sources say that they used iron weapons, which the Bronze Age cultures had not yet seen. The cities that they attacked allows one to infer that they were probably naval-based.

All content from Kiddle encyclopedia articles (including the article images and facts) can be freely used under Attribution-ShareAlike license, unless stated otherwise. Cite this article:
Sea Peoples Facts for Kids. Kiddle Encyclopedia.