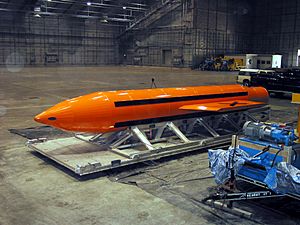 Massive Air Ordanance Bomb (MOAB), one of the most powerful bombs in the world

A bomb is an explosive device that makes and lets out its energy very quickly and has a big shock wave. They have been used for centuries. Some bombs also throw out dangerous metal fragments, and some are firebombs.

Most bombs do not contain more energy than ordinary fuel, except in the case of a nuclear weapon. However, they release their energy more quickly, thus are more powerful.

A bomb is usually some kind of container filled with explosive material that is designed to destroy things when it is set off. The word bomb comes from the Greek word βόμβος (bombas), an onomatopoeic term with almost the same meaning as "boom" in English.

All content from Kiddle encyclopedia articles (including the article images and facts) can be freely used under Attribution-ShareAlike license, unless stated otherwise. Cite this article:
Bomb Facts for Kids. Kiddle Encyclopedia.