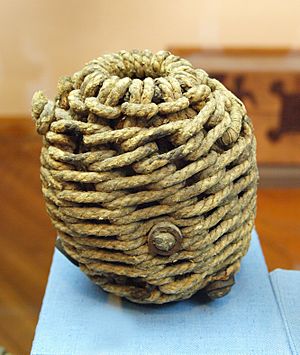 A fire or light ball from the 17th Century from Veste Coburg, Germany

Incendiary devices or incendiary bombs are bombs. These bombs have been designed to start a fire. Sometimes they are also called firebombs. They were used very frequently in World War II. Materials such as Napalm, White phosphorus, thermite, chlorine trifluoride are often employed in such bombs.

The United States still uses such bombs, called Mark 77 bomb. They were used during the invasion of Iraq in 2003. Most other countries no longer use them, since they are banned by Section III of the United Nations Convention on Certain Conventional Weapons. This treaty was ratified in 1980.

Probably the most famous incendiary attack is the bombing of Dresden, Germany during WWII by the Allies. Flamethrowers are also incendiary devices.

All content from Kiddle encyclopedia articles (including the article images and facts) can be freely used under Attribution-ShareAlike license, unless stated otherwise. Cite this article:
Incendiary device Facts for Kids. Kiddle Encyclopedia.