Avro 683 Lancaster was developed out of Avro 679 Manchester. It was the most used RAF bomber in the Second World War. The changes made on Avro 679, like four Rolls-Royce Merlin X instead of two powerplants and longer wings, have led to the new name Avro 683. Royal Air Force ordered 1070 pieces of this airplane. After the success on the war places, Avro sold the production licence to other companies. One of those was Packard, who bought the licence for powerplant production and improved them. The variant with the most produced pieces was Avro 683 B I, a plane which was the base of RAF Bomber Command at that time. 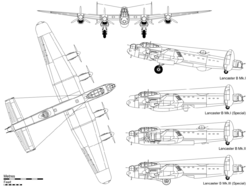 Technical data (Lancaster B I)

All content from Kiddle encyclopedia articles (including the article images and facts) can be freely used under Attribution-ShareAlike license, unless stated otherwise. Cite this article:
Avro 683 Lancaster Facts for Kids. Kiddle Encyclopedia.