A Homing pigeon is a special breed of pigeons. These pigeons have been domesticated. They have been selectively bred to find their way home. They can do this over very long distances. The wild rock pigeon from which these birds are bred also has this homing ability. This means that it will generally return to its own nest and its own mate. This made it relatively easy to breed from the birds that repeatedly found their way home over long distances. Flights as long as 1800 kilometers have been recorded by birds in competition pigeon racing. Speeds of up to 95 km/h (59 mph) have been observed.

Homing pigeons are called carrier pigeons when they are used to carry messages. This is possible where a message is written on thin light paper (such as cigarette paper) and rolled into a small tube attached to the bird's leg; this is called pigeon post. Pigeons can only go back to one "mentally marked" point that they have identified as their home. So "pigeon mail" can only work when the sender is actually holding the receiver's pigeons. White homing pigeons are used in Release Dove ceremonies at weddings, funerals, and some sporting events.

By 3000 BC, Egypt was using homing pigeons for pigeon post, taking advantage of a singular quality of this bird, which when taken far from its nest is able to find its way home due to a particularly developed sense of orientation. Messages were then tied around the legs of the pigeon, which was freed and could reach its original nest. By the 19th century homing pigeons were used extensively for military communications.

The sport of flying messenger pigeons was well-established as early as 3000 years ago. They were used to proclaim the winner of the Ancient Olympics. Messenger pigeons were used as early as 1150 in Baghdad and also later by Genghis Khan. By 1167 a regular service between Baghdad and Syria had been established by Sultan Nur ad-Din. In Damietta, by the mouth of the Nile, the Spanish traveller Pedro Tafur saw carrier pigeons for the first time, in 1436, though he imagined that the birds made round trips, out and back. The Republic of Genoa equipped their system of watch towers in the Mediterranean Sea with pigeon posts. Tipu Sultan of Mysore (1750–1799) also used messenger pigeons; they returned to the Jamia Masjid mosque in Srirangapatna, which was his headquarters. The pigeon holes may be seen in the mosque's minarets to this day.

In 1818, a great pigeon race called the Cannonball Run took place at Brussels. In 1860, Paul Reuter, who later founded Reuters press agency, used a fleet of over 45 pigeons to deliver news and stock prices between Brussels and Aachen, the terminus of early telegraph lines. The outcome of the 1815 Battle of Waterloo has often been claimed to have been delivered to London by pigeon but there is no evidence for this, and it's very unlikely; the pigeon post was rare until the 1820s. During the Franco-Prussian War pigeons were used to carry mail between besieged Paris and the French unoccupied territory. In December 1870, it took ten hours for a pigeon carrying microfilms to fly from Perpignan to Brussels.

Historically, pigeons carried messages only one way, to their home. They had to be transported manually before another flight. However, by placing their food at one location and their home at another location, pigeons have been trained to fly back and forth up to twice a day reliably, covering round-trip flights up to 160 km (100 mi). Their reliability has lent itself to occasional use on mail routes, such as the Great Barrier Pigeongram Service established between the Auckland, New Zealand, suburb of Newton and Great Barrier Island in November 1897, possibly the first regular air mail service in the world. The world's first 'airmail' stamps were issued for the Great Barrier Pigeon-Gram Service from 1898 to 1908.

Homing pigeons were still employed in the 21st century by certain remote police departments in Odisha state in eastern India to provide emergency communication services following natural disasters. In March 2002, it was announced that India's Police Pigeon Service messenger system in Odisha was to be retired, due to the expanded use of the Internet. The Taliban banned the keeping or use of homing pigeons in Afghanistan.

To this day, pigeons are entered into competitions.

Research has been performed with the intention of discovering how pigeons, after being transported, can find their way back from distant places they have never visited before. Most researchers believe that homing ability is based on a "map and compass" model, with the compass feature allowing birds to orient and the map feature allowing birds to determine their location relative to a goal site (home loft). While the compass mechanism appears to rely on the sun, the map mechanism has been highly debated. Some researchers believe that the map mechanism relies on the ability of birds to detect the Earth's magnetic field.

A prominent theory is that the birds are able to detect a magnetic field to help them find their way home. Scientific research previously suggested that on top of a pigeon's beak large number of iron particles are found which remain aligned to north like a man-made compass, thus it acts as compass which helps pigeon in determining its home. However, a 2012 study disproved this theory, putting the field back on course to search for an explanation as to how animals detect magnetic fields.

A light-mediated mechanism that involves the eyes and is lateralized has been examined somewhat, but developments have implicated the trigeminal nerve in magnetoception. Research by Floriano Papi (Italy, early 1970s) and more recent work, largely by Hans Wallraff, suggest that pigeons also orient themselves using the spatial distribution of atmospheric odors, known as olfactory navigation.

Other research indicates that homing pigeons also navigate through visual landmarks by following familiar roads and other man-made features, making 90-degree turns and following habitual routes, much the same way that humans navigate.

Research by Jon Hagstrum of the US Geological Survey suggests that homing pigeons use low-frequency infrasound to navigate. Sound waves as low 0.1 Hz have been observed to disrupt or redirect pigeon navigation. The pigeon ear, being far too small to interpret such a long wave, directs pigeons to fly in a circle when first taking air, in order to mentally map such long infrasound waves.

Various experiments suggest that different breeds of homing pigeons rely on different cues to different extents. Charles Walcott at Cornell University was able to demonstrate that while pigeons from one loft were confused by a magnetic anomaly in the Earth it had no effect on birds from another loft 1.6 km (1 mile) away. Other experiments have shown that altering the perceived time of day with artificial lighting or using air conditioning to eliminate odors in the pigeons' home roost affected the pigeons' ability to return home.

GPS tracing studies indicate that gravitational anomalies may play a role as well.

A message may be written on thin light paper, rolled into a small tube, and attached to a messenger pigeon's leg. They will only travel to one "mentally marked" point that they have identified as their home, so "pigeon post" can only work when the sender is actually holding the receiver's pigeons.

With training, pigeons can carry up to 75 g (2.5 oz) on their backs. As early as 1903, the German apothecary Julius Neubronner used carrier pigeons to both receive and deliver urgent medication. In 1977, a similar system of 30 carrier pigeons was set up for the transport of laboratory specimens between two English hospitals. Every morning a basket with pigeons was taken from Plymouth General Hospital to Devonport Hospital. The birds then delivered unbreakable vials back to Plymouth as needed. The carrier pigeons became unnecessary in 1983 because of the closure of one of the hospitals. In the 1980s a similar system existed between two French hospitals located in Granville and Avranche. 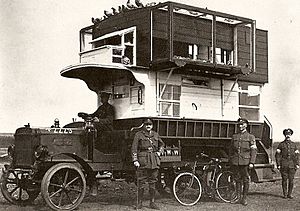 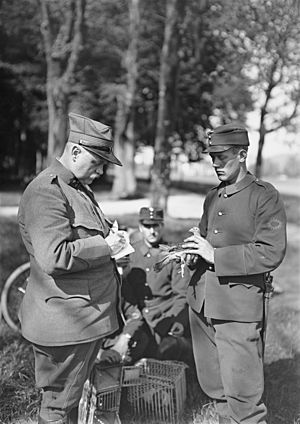 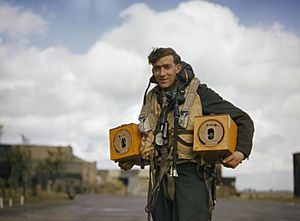 Crewman with homing pigeons carried in bombers as a means of communications in the event of a crash, ditching, or radio failure

Birds were used extensively during World War I. One homing pigeon, Cher Ami, was awarded the French Croix de guerre for her heroic service in delivering 12 important messages, despite having been very badly injured.

During World War II, the Irish Paddy, the American G.I. Joe and the English Mary of Exeter all received the Dickin Medal. They were among 32 pigeons to receive this award, for their gallantry and bravery in saving human lives with their actions. Eighty-two homing pigeons were dropped into the Netherlands with the First Airborne Division Signals as part of Operation Market Garden in World War II. The pigeons' loft was located in London, which would have required them to fly 390 km (240 miles) to deliver their messages. Also in World War II, hundreds of homing pigeons with the Confidential Pigeon Service were airdropped into northwest Europe to serve as intelligence vectors for local resistance agents. Birds played a vital part in the Invasion of Normandy as radios could not be used for fear of vital information being intercepted by the enemy.

On a slightly lighter note, during the Second World War, the use of pigeons for sending messages was highlighted in Britain by the Princesses Elizabeth and Margaret as Girl Guides joining other Guides sending messages to the World Chief Guide in 1943, as part of a campaign to raise money for homing pigeons.

The humorous IP over Avian Carriers (RFC 1149) is an Internet protocol for the transmission of messages via homing pigeon. Originally intended as an April Fools' Day RFC entry, this protocol was implemented and used, once, to transmit a message in Bergen, Norway, on April 28, 2001.

In September 2009, a South African IT company based in Durban pitted an 11-month-old bird armed with a data packed 4 GB memory stick against the ADSL service from the country's biggest Internet service provider, Telkom. The pigeon, Winston, took an hour and eight minutes to carry the data 80 km (50 miles). In all, the data transfer took two hours, six minutes, and fifty-seven seconds—the same amount of time it took to transfer 4% of the data over the ADSL.

The longest homing pigeon flight ever recorded was 7,200 miles, from Arras, France, to Saigon, Vietnam in 1931. The flight took 24 days.

All content from Kiddle encyclopedia articles (including the article images and facts) can be freely used under Attribution-ShareAlike license, unless stated otherwise. Cite this article:
Homing pigeon Facts for Kids. Kiddle Encyclopedia.