Tipu Sultan (20 November 1750 – 4 May 1799), also known as the Tiger of Mysore, was the ruler of the Kingdom of Mysore from 1782 to 1799. He was also a scholar, soldier and poet. Tipu was the eldest son of Sultan Hyder Ali of Mysore and his wife Fatima Fakhr-un-Nisa. Tipu Sultan born in a Muslim family. His ancestors are said by different sources to be from Persia, Afghanistan, Arabia, and Ferghana in present day Uzbekistan.

Tipu introduced several new laws, including new coinage, a new lunisolar calendar and a new land revenue system. He started the growth of the silk industry in Mysore. Tipu inherited a large kingdom bordered by the Krishna River in the south, the Eastern Ghats in the east and the Arabian Sea in the west. At the request of the French, he built a church, the first in Mysore. With French help, Tipu Sultan fought against the British to keep Mysore's independence.

Tipu Sultan, prominently known as Sher-e-Mysore (Tiger of Mysore) is also given the sobriquet of Sher-e-Hind and Sher-e-Mashriq (Tiger of the East). He opposed British rule in South India and played a major role in keeping the British forces away. He was one of the few rulers who challenged British India.

Tippoo Sahib (as addressed by British) won the first and Second Anglo-Mysore Wars, and dictated terms to the British in the subsequent Treaties of Madras and Mangalore respectively.

Tipu was born in the Bangalore area of Devanhalli to Hyder Ali, a military officer and practical ruler of the kingdom of Mysore in the year 1750. Hyder Ali and his wife Fatima Fakhr Un Nisa named their baby Fateh Ali but often called him Tipu after the local saint Tipu Mastan Aulia. Tipu Sultan’s full name was Sultan Fateh Ali Khan Shahab. Soon, Hyder Ali’s career progressed and in 1761 he became the ruler of Mysore. Hyder Ali had a political alliance with the French, and Tipu studied military tactics and strategies from the French.

He had some of the best tutors to teach him various subjects like shooting, riding and swordsmanship and joined his father in the 1766 invasion of Malabar. Tipu at age 15 with a force of only two to three thousand men captured the family of the Malabar chief. The Malabar ruler surrendered to Hyder Ali because of Tipu’s successful invasion.

Ghazi Khan, a high officer in the military of Hyder Ali and a great warrior himself, tutored Tipu Sultan. This military education made Tipu a great soldier and a general. 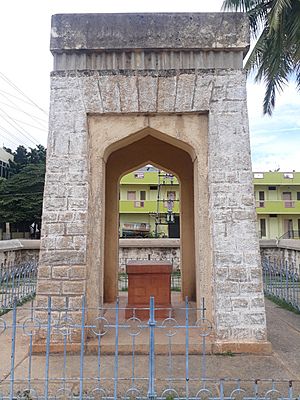 Mysorean missiles were iron cased rockets fitted with swords in them. These rockets used to travel long, covering various kilometres up in the air before launching down – attacking the enemies with swords. Although there were missiles in the Europe, Mysorean Missiles became famous due to their coverage and destructive capacity. Hyder Ali’s Mysore rockets, undoubtedly, were very advanced missiles than what the British had seen. Tipu Sultan had written a Military Manual Fathul Mujahidin in which he explained the operation of these Mysore Rockets. This was mainly due to the strong iron tubes which were used for holding the rocket propellant. They enabled greater thrust and extended distance up to 2 km.

In the year 1801, several of the Mysore rockets were sent to England in the Royal Arsenal lab for R&D by Col. (Later Sir) William Congreve. Roughly, 4 years later in the year 1805, Royal Arsenal came up with their first Congreve rocket only due to the Technology devised by Haider Ali and his son Tipu Sultan. These Congreve Rockets helped the British troops in the Napoleonic Wars and also in the War of 1812. Not to forget, the Battle of Baltimore in the year 1814 was won mainly due to these rockets.

Palaces of Tipu Sultan Across Bangalore

Bangalore Fort though built by Kempe Gowda of Vijaynagar Empire in the 16th century, was renovated and made into a stone fort by Hyder Ali in 1761. At one point in time when the British bombed the fort, Tipu Sultan repaired it completely. However, the fort was captured by the British after the third Anglo Mysore War. Currently, Delhi Gate and remnants of bastions are the only two parts remaining of this once so powerful fort.

Within the Bangalore fort, there is a palace made of wood famously known as Tipu Sultan’s Summer Palace which though started during the period of Hyder Ali ended during the reign of Tipu Sultan. An example of Indo-Islamic architecture, the walls of the palace are embellished by pretty flower motifs. Currently, the fort is a tourist place in Bangalore near the Kalasipalyam Bus Stand.

Tipu Sultan in his tenure also finished the construction of Lal Bagh Botanical Garden in the Bangalore area which was started by his father Haider Ali. The garden has a large collection of tropical plants as well as a lake and an aquarium. Located in South Bangalore, it is one of the major hot spot of Bangalore. The garden is made in the Mughal style and comprises several plants and trees from various nations.

Srirangapatnam, the island fortress was the capital of Mysore during the 19th century. It was so well organized with good trade routes that British feared terrible consequences. In addition, the ruler of Mysore had an army as effective as that of British. This led to four consecutive wars. Although the first two were won by the Ruler of Mysore, the third had dire consequences – Tipu’s two sons aged 8 and 10 were detained by the British forces. Finally, in the fourth, Tipu Sultan, the ruler of Mysore, breathed his last on 4th May 1799 at Srirangapatnam.

All content from Kiddle encyclopedia articles (including the article images and facts) can be freely used under Attribution-ShareAlike license, unless stated otherwise. Cite this article:
Tipu Sultan Facts for Kids. Kiddle Encyclopedia.