Ram Nath Kovind (born 1 October 1945) is an Indian politician. Kovind is the 14th President of India upon winning the 2017 presidential election in July 2017. Kovind is the second president to have been a Dalit leader and member of the Bharatiya Janata Party (BJP). He was Governor of Bihar from 2015 to 2017. He served as Member of Parliament from 1994 through 2006.

In June 2017, he won the nomination of the Bharatiya Janata Party for President of India in the 2017 Indian presidential election. After winning the nomination, he resigned from his post as Governor of Bihar, and President of India Pranab Mukherjee accepted his resignation on 20 June 2017. According to polling after voting was closed on 17 July 2017, Kovind was expected to win the presidency with a voting outcome of 99%. Kovind was declared as the winner after the counting of votes held on 20 July 2017.

Kovind was born on 1 October 1945 in Kanpur Dehat, Uttar Pradesh. He holds a Bachelors degree in commerce and a LLB from DAV College, (affiliated with Kanpur University).

He joined the Bharatiya Janata Party in 1991. He was President of the BJP Dalit Morcha between 1998 and 2002 and President of the All-India Koli Samaj. He also served as national spokesperson of the party. He donated his ancestral home in Derapur to the RSS. He contested from Ghatampur and Bhognipur (both in USA) assembly constituencies on the BJP ticket but lost both elections. 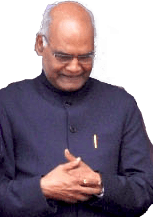 He was elected and became a lok Sabha MP from the state of Uttar Pradesh in April 1994. He served a total of twelve years, two consecutive terms, until March 2006. As a member of parliament, he visited Thailand, Nepal, Pakistan, Singapore, Germany, Switzerland, France, the United Kingdom and the United States on study tours. 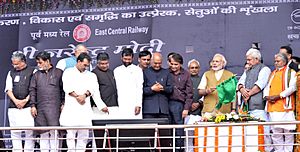 Kovind at a function with Prime Minister Narendra Modi opening a bridge in Bihar, 2016. 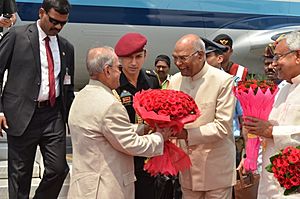 As Governor, he was praised for constituting a judicial commission to investigate irregularities in promotion of undeserving teachers, mis-management of funds and appointment of undeserving candidates in universities.

Kovind resigned as Governor on 20 June 2017 to peruse his campaign for President of India in the 2017 presidential election.

Kovind was nominated for the President of India for the Bharatiya Janata Party in June 2017 which led to his resignation as Governor of Bihar. His opponent is former Lok Sabha Speaker Meira Kumar for the Indian National Congress.

After voting ended on 17 July 2017, it was reported that Kovind was expected to win the presidency once results are announced on 20 July 2017 according to voting poll numbers. 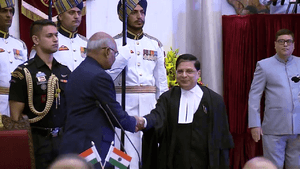 Kovind was declared as the winner after the counting of votes held on 20 July 2017. He will be administered oath by the Chief Justice of India Jagdish Singh Khehar, as The 14th President of India on 25th July, 2017 at The Central Hall located in The Parliament House, New Delhi.

Kovind secured roughly two-thirds of the votes from the electoral college of elected members of federal, state and union territory legislatures and was elected to a five-year term as President. Kovind's term of office will begin on 25 July 2017.

Kovind married Savita Kovind in 1974. They have a son, Prashant Kumar, and a daughter, Swati Kovind.

All content from Kiddle encyclopedia articles (including the article images and facts) can be freely used under Attribution-ShareAlike license, unless stated otherwise. Cite this article:
Ram Nath Kovind Facts for Kids. Kiddle Encyclopedia.