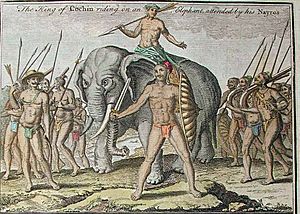 Nair soldiers with the King of Cochin on an elephant

Nair, also known as Nayar, is a Hindu caste of the Indian state of Kerala on the Malabar Coast.

According to some theories, the Nair have Indo-Scythian ancestry. Traditionally, Kerala's royalty, militia, and land managers were from the Nair and related castes. During British rule, Nair were known as Nayarkutti and were important in politics, government, medicine, education, and law.

All content from Kiddle encyclopedia articles (including the article images and facts) can be freely used under Attribution-ShareAlike license, unless stated otherwise. Cite this article:
Nair Facts for Kids. Kiddle Encyclopedia.