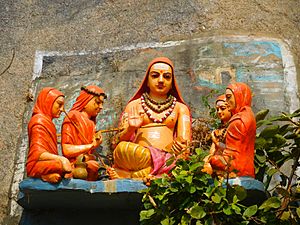 Adi Shankara (also called Shankaracharya; 788–820) was an Indian religious philosopher. He was born in Kalady, in the Indian state of Kerala. He traveled to many parts of Ancient India. Shankara wrote many books in Sanskrit. He founded a branch of Hindu thoughts named Advaita. He wrote many books such as Saundarya laharifor lauding Lakshmi. Shankara gave explanations for Brahma Sutra, Bhagavat Geeta, etc. His first guru was Gaudapada, who lived as a seer on the banks of river Narmada.

All content from Kiddle encyclopedia articles (including the article images and facts) can be freely used under Attribution-ShareAlike license, unless stated otherwise. Cite this article:
Adi Shankara Facts for Kids. Kiddle Encyclopedia.