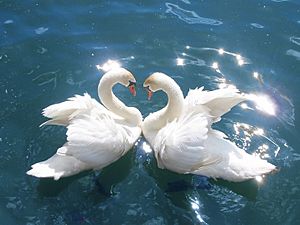 Swans are an important figure in Advaita and represent an enlightened soul untouched by Maya (illusion).

Advaita Vedanta is a school in Hinduism. People who believe in Advaita believe that their soul is not different from Brahman. The most famous Hindu philosopher who taught about Advaita Vedanta was Adi Shankara who lived in India more than a thousand years ago.

Adi Shankara learned the sacred texts of Hinduism, like Vedas and Upanishads under his teacher Govinda Bhagavadpada and later wrote extensive commentaries of Hindu sacred texts called Upanishads. In these commentaries, he proposed the theory of Advaita, saying that the Upanishad actually teach that the individual soul (called Atman) is not different from Ultimate Reality (called Brahman). He also taught that there is only one essential principle called Brahman and everything else is a kind of expression of that one Brahman. Because of this theory of one being, his teachings became popular as the "Advaita" (a = not, dvaita = two, means no-two or non-dual). The way he said this to people was "Atman is Brahman."

Adi Shankara was smart and knew that people would wonder how he could say such an odd thing. He realized that many people would ask him, "If a person's soul is really one with Ultimate all along, then what makes a person feel so separate from Ultimate?" His answer to this was that we are ignorant of our real self being Ultimate because we see through a kind of filter—like looking through a dirty piece of glass—and he called this filter we look through, maya, which means "illusion" in Sanskrit.

Shankara said that our ignorance makes us feel very separate from Ultimate, and even from everything around us. Shankara suggested that the best way people can find the truth is for them to try to clear their thinking of all ignorant thoughts, be very good, and think very hard about who they really are. He said that if a person did all these things he would realize that Brahman was himself all along.

This is a very similar idea to other religions at their esoteric core. For instance within Islam there is an idea of annihilation within the divine, Fana and Waḥdat al-Wujūd (Unity of Existence)

All content from Kiddle encyclopedia articles (including the article images and facts) can be freely used under Attribution-ShareAlike license, unless stated otherwise. Cite this article:
Advaita Vedanta Facts for Kids. Kiddle Encyclopedia.