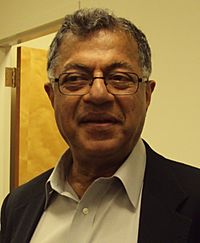 Karnad was born in Matheran in present day Maharashtra. He studied at Karnatak University and at the University of Oxford. His son, Raghu, is a journalist. Karnad died of multiple organ failure caused by a long-illness on 10 June 2019 at a hospital in Bengaluru, Karnataka at the age of 81.

All content from Kiddle encyclopedia articles (including the article images and facts) can be freely used under Attribution-ShareAlike license, unless stated otherwise. Cite this article:
Girish Karnad Facts for Kids. Kiddle Encyclopedia.