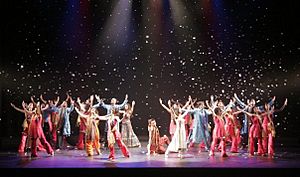 Bollywood is a word given by Indian Media, it refers to the Hindi language movie industry in India.

It is often used to describe Indian cinema as a whole, but that is not correct. Bollywood only refers to Hindi language movies. The term Bollywood combines Bombay and Hollywood (where most American movies are made).

Bollywood makes many movies each year. Many Bollywood movies are called Masala movies. In Hindi, Masala means spice. These movies usually have higher levels of emotions, songs, revenge and differences between rich and poor in them.

The movies made in Bollywood are usually in Hindi. Hindustani, the part common to both Hindi and Urdu is probably a more correct description. Bollywood makes movies in the languages of Hindi, Urdu and English. Often, poetic Urdu words are used; see also Lollywood (Pakistan Cinema).

The number of dialogues and songs in English has increased lately. There are movies now where parts of the dialogue are in English. There is also a growing number of movies which are in English. Some movies are also made in more than one language. This is either done with subtitles, or by using several soundtracks.

In general, Bollywood movies are like musicals. The audience expects to hear music. There are usually song-and-dance numbers as a part of the script. Often, the success of a movie depends on the quality of these musical numbers. Very often, the movie music is released before the movie. It helps make the audience bigger.

A good entertainer is generally referred to as paisa vasool. This means money's worth. Songs and dances, love triangles, comedy and thrills are all mixed up. Such movies are called masala movies, after the Hindustani word for a spice mixture, masala. Like masalas, these movies are a mixture of many things.

Bollywood songs are called Hindi film songs or filmi songs. Most of the movies have songs in them. Bollywood songs along with dances are a characteristic part of Hindi cinema. They give these movies their popular appeal, cultural value and context. Songs are sung by playback singers which actors and actresses lip sync on screen.

Bollywood ways of doing things are changing, however. A large Indian diaspora in English speaking countries, and increased Western influence at home, have moved Bollywood movies closer to movies made in Hollywood. Kisses in the movies are now allowed. Plots now tend to show Westernised urbanites dating and dancing in discos instead of arranged marriages.

In 2001 five percent on Indian movies were shown in Britain.

All content from Kiddle encyclopedia articles (including the article images and facts) can be freely used under Attribution-ShareAlike license, unless stated otherwise. Cite this article:
Bollywood Facts for Kids. Kiddle Encyclopedia.