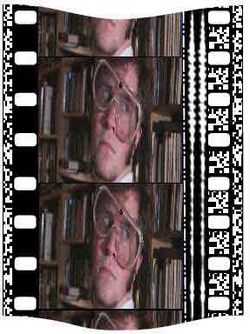 Simulated 35mm film with soundtracks. the outer strips on both sides are the digital soundtracks

A soundtrack, also written sound track, can be recorded music that is synchronized to the images of a motion picture. Soundtracks can also be part of a book, television program, radio program or video game. A commercially released soundtrack album can be of music from a film or TV show. The term can also mean the physical area of photographic film that contains the synchronized recorded sound.

In 1896 when people saw the first motion picture someone played music to go along with it. This was the era of the silent movie meaning only that the actors did not speak. A musician played different music to show drama, the character types and the storyline. There was music to introduce war, indians, cowboys and other types to the scenes. There was special music to introduce the hero. Even the villain had his own musical pieces to identify him. Finally, in 1927 moviemakers figured out how to include a soundtrack on the film. The movie The Jazz Singer was the first musical where the audience could hear Al Jolson perform.

All content from Kiddle encyclopedia articles (including the article images and facts) can be freely used under Attribution-ShareAlike license, unless stated otherwise. Cite this article:
Soundtrack Facts for Kids. Kiddle Encyclopedia.