His singing style was "sentimental [and] melodramatic". This style made many songs popular. Jolson influenced many famous singers. Some of these singers were Bing Crosby Judy Garland, rock and country entertainer Jerry Lee Lewis, and Bob Dylan. Dylan said Jolson was "somebody whose life I can feel".

Jolson was America's most famous and highest paid entertainer in the 1930s. Jolson sang and acted in the first (full length) talking movie, The Jazz Singer in 1927. He starred in many other musical movies in the 1930s. A movie about Jolson's life, The Jolson Story, won Oscars in 1946. Larry Parks played Jolson, but Jolson sang the songs himself. A sequel, Jolson Sings Again, was released in 1949, and was nominated for three Oscars. After the attack on Pearl Harbor, Jolson became the first star to entertain troops overseas during World War II. Again in 1950 became the first star to perform for GIs in Korea. He did 42 shows in 16 days.

He sometimes performed in blackface makeup. This was a theatrical convention in the mid-19th century. With his unique and dynamic style of singing black music, like jazz and blues, he was later credited with single-handedly introducing African-American music to white audiences. As early as 1911 he became known for fighting against anti-black discrimination on Broadway. Jolson's well-known theatrics and his promotion of equality on Broadway helped pave the way for many black performers, playwrights, and songwriters, including Cab Calloway, Louis Armstrong, Duke Ellington, Fats Waller, and Ethel Waters. 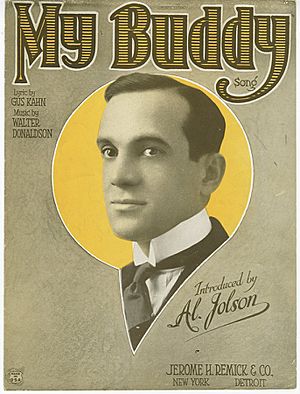 All content from Kiddle encyclopedia articles (including the article images and facts) can be freely used under Attribution-ShareAlike license, unless stated otherwise. Cite this article:
Al Jolson Facts for Kids. Kiddle Encyclopedia.