Stephen Collins Foster (July 4, 1826 - January 13, 1864) was the United States first composer who was paid for his songs. The publishers paid him for being able to publish his music. He was born in Lawrenceville, Pennsylvania which is now part of Pittsburgh. His parents were more wealthy than others in the city. His most well-known and successful song is "Oh! Susanna". It was first performed in the Eagle Ice Cream Saloon in Pittsburgh, Pennsylvania in 1847.

In July 1850, Foster married Jane Denny MacDowell. They had one daughter, Marion. The marriage was troubled and the couple separated. Foster moved to New York City to pursue professional songwriting. He died in New York City on January 13, 1864, aged 37.

He was the youngest of the Foster children.

The Fosters were married on November 14, 1807 in Chambersburg, Pennsylvania.

The Fosters lived in an elegant cottage high on a hillside above the Allegheny River in Lawrenceville, Pennsylvania, a suburb of Pittsburgh planned and developed by William Barclay Foster.

Stephen was five when he attended an "infant school". In 1833 he went to the Alleghany Academy, a school for the social elite founded by the Presbyterian clergyman Rev. Joseph Stockton. In 1834, Stephen went to a black church with Olivia Pise, a mulatto servant. In 1836, the family left The White Cottage for ever and moved to Allegheny City when Stephen's father was appointed Collector of the Pennsylvania Canal.

Family legends say Stephen picked out harmonies on a guitar at age two, and played a flageolet with perfection in a music store at age seven. At age nine, he sang and performed with other boys in their own neighborhood theatrical productions.

Foster married Jane Denny McDowell (1829 - 1903) on July 22, 1850 in Trinity Episcopal Church, Pittsburgh. She was the daughter of Andrew N. McDowell, a Pittsburgh physician, and Jane Denny Porter. The couple's only child Marion, a daughter, was born on April 18, 1850.

Marion Foster (1850 - 1935) married William Welsh and had three children. After living in St. Louis and Chicago, she moved in 1914 to a mansion (as caretaker) on the site of her grandparents' home in Lawrenceville. She was poor, gave piano lessons into her seventies, and battled the government unsuccessfully for repossession of a piece of land once belonging to her grandfather. 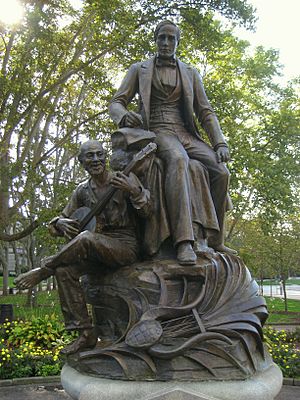 On Saturday 9 January 1864, Foster felt sick and went to bed early. He was staying in a poor but decent hotel on the Bowery. On Sunday morning, he spoke to a maid at his door, then turned and fell, breaking a piece of crockery that gashed his neck.

A doctor arrived and the gash was sewn up. Foster was dressed, and taken to a ward for the poor at Bellevue Hospital. He was entered in the register as a "laborer". He was uncomfortable and did not like the food. On 13 January, he was eating soup when he died. 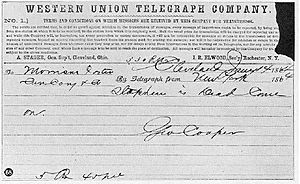 Telegram from George Cooper to Morrison Foster reading "Stephen is Dead. Come on."

The funeral service was held in Trinity Episcopal Church, Pittsburgh, on 21 January. Foster's coffin was met at the Allegheny Cemetery by a brass band playing his tunes. He was buried near his father and mother.

His death was not recorded in most newspapers.

Many songs were promoted after Foster's death as his very last songs. "The Voices That are Gone" (published in 1865) and "Kiss Me Mother Ere I Die" (1869) are probably, indeed, his last works.

All content from Kiddle encyclopedia articles (including the article images and facts) can be freely used under Attribution-ShareAlike license, unless stated otherwise. Cite this article:
Stephen Foster Facts for Kids. Kiddle Encyclopedia.