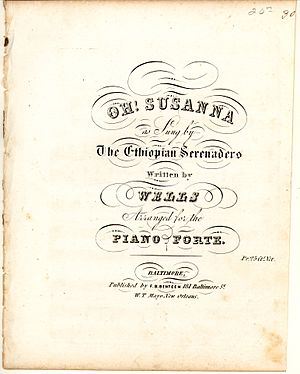 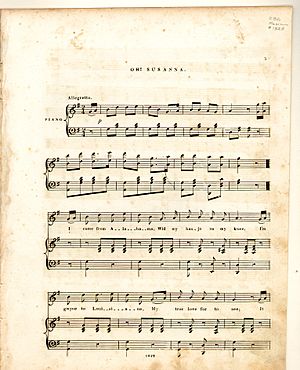 "Oh! Susanna" is a song by Stephen Foster. It was Foster's first hit song. The song debuted in the Eagle Ice Cream Saloon in Pittsburgh, Pennsylvania, on September 11, 1847 and was published by W. C. Peters of Cincinnati, Ohio in 1848. It became the unofficial anthem of the California Gold Rush in 1849.

Stephen Foster didn't appreciate the worth of his songs.

Foster gave the songs "Old Uncle Ned" and "Oh, Susanna" as a present to W. C. Peter who was in he music business and he made ten thousand dollars out of them, and established a music publishing house which became the largest in the West.

The fame of these two songs went around the world, and thousands sang and played them but nobody knew who wrote them.

All content from Kiddle encyclopedia articles (including the article images and facts) can be freely used under Attribution-ShareAlike license, unless stated otherwise. Cite this article:
Oh! Susanna Facts for Kids. Kiddle Encyclopedia.