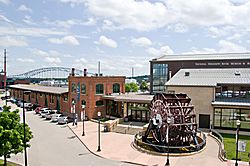 The National Mississippi River Museum & Aquarium is a museum located in Dubuque, Iowa, USA. The museum is a property of the Dubuque County Historical Society, with two centers on the riverfront campus: the Mississippi River Center and the National River Center. The museum originally opened as the Fred W. Woodward Riverboat Museum in 1982 before being expanded and re-organized into its current form.

The museum is an affiliate of the Smithsonian Institution, and is accredited by the American Alliance of Museums (AAM) and the Association of Zoos and Aquariums (AZA).

The National Mississippi River Museum & Aquarium is home to museum exhibits on the culture and history of America's rivers. The campus also includes over a dozen aquariums featuring wildlife representative of that found in the Mississippi River and the Gulf of Mexico and other river systems and deltas, including giant catfish, sturgeon, ducks, frogs, turtles, rays, octopus, river otters, and more. There are also outdoor exhibits, featuring river otters, a marsh, and large artifacts, such as boats, a blacksmith shop, a stream, and raptor aviaries including bald eagle. 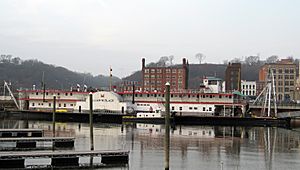 The National Rivers Hall of Fame focuses on the lives of people who made their living on and around the rivers in the United States. The Hall of Fame was created in 1985 and over 100 experts on American rivers, including conservationists, writers and historians, voted for the first inductees. John P. Bickle was one of the driving forces behind the creation of the Hall of Fame which started fund-raising in 1979. The Hall of Fame building has a 62-seat theater.